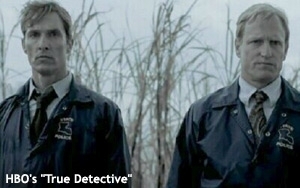 The effectiveness and overall impact of HBO’s “True Detective” -- the first-arc finale of which proved such a draw last night that it crashed HBO Go -- should be a signal to the television industry that there is success to be had in exploring new programming models. Audiences seem less interested in prolonged seasons of any series, especially when they are presented with perpetual preemptions, or in fall and spring seasons with a prolonged break in between. That break is an annoyance that stalls the momentum a show may have built up from September through December or January before the annual scheduling challenges begin.

That wasn’t a problem for “True Detective,” episodes of which premiered at 9 p.m. ET in mid-January and ran on eight Sundays with only one interruption (to avoid the Super Bowl) but otherwise without concern about such competitive programming blockbusters as the Grammy Awards, the Academy Awards or AMC’s “The Walking Dead.” HBO made one of the smartest scheduling moves in recent memory, running a drama series starring Matthew McConaughey right through an awards season punctuated by his many nominations for his role in the theatrical film “Dallas Buyers Club,” not to mention the added benefit of all the interviews and press opportunities that resulted from all the actual awards he received. (I suspect he’ll pick up a couple more for “True Detective.”)

This show ran for only eight episodes -- but they had a running time of approximately one hour each, which roughly equals ten episodes of a broadcast or basic cable series when factoring in time lost to commercial pods. That was just enough to build and maintain interest without the show becoming a chore to stay with, as sometimes happens with even the best series. It also made for easy catch-ups during the season and for comfortable aftermath binges. Eight hours might kill one day, but it won’t destroy a weekend. To look at it another way, with its episodes strung together the first arc of “True Detective” could be thought of as an eight-hour movie.

Regardless, series formats and models are suddenly in play as never before. One can forgive anybody who is feeling a sense of confusion about the issue. Perhaps this guide will help, especially as the Upfront season approaches and dozens of networks suddenly dump hundreds of new programs of many kinds into a massive heap that advertisers and critics are supposed to process with unlimited interest. (That worked in the old days of a three- or four-network Upfront, but now May has a madness all its own.)

A mini-series has always been -- and should continue to be -- a one-time closed-ended series that plays over several consecutive nights or weeks. Sundance’s “Top of the Lake” and BBC America’s “Fleming” are perfect recent examples, even if they were considerably shorter than such legendary miniseries of the past as “Rich Man, Poor Man,” “Roots” and “North and South.”

“True Detective” and FX’s “American Horror Story” are looked upon as mini-series simply because that is the most convenient definition, and I suppose it fits. But each season of “AHS” continues to build an over-arching brand, as I’m certain future seasons of “Detective” will also do. I think these are the true “event” series of our time, rather than mere “minis,” because the return of the brand each year does qualify as something new and special.

Ongoing broadcast series that are scheduled outside of the traditional broadcast season -- like CBS’ “Under the Dome” and “Extant” and Fox’s upcoming “24: Live Another Day” -- are currently being referred to as “event” series. But as long as they continue season to season with the same characters and continuous story lines they should be regarded as “regular” series --  as they would be on basic and pay cable -- and nothing more. (I haven’t seen it, but I’m already thinking of “Live Another Day” as a ninth season of “24,” rather than some kind of stand-alone “event,” even if it is only twelve episodes, a dramatic departure from its past model -- which, we shouldn’t forget, had gotten stale).

“Regular” series continue to be reshaped and rescheduled in all kinds of ways. I consider BBC America’s superb back-from-the-dead drama “In the Flesh” to be a regular series, because it has seasons that continue the same story lines with the same characters. It matters not that the first season was only three episodes long (which, minus commercial time, comes out to one longish theatrical movie). The same is true of BBC America’s “Broadchurch” and Sundance’s “The Returned” (a French import) with their eight-episode cycles of ongoing stories or new stories with ongoing characters.

Streaming series like “House of Cards” and “Orange is the New Black” are “regular” series masquerading as “events” because that’s exactly what they are for most people who adjust their lives around them to consume them in their entirety as quickly as possible. So, for now anyway, Netflix gets to have it both ways. I suppose it can be argued that any series anywhere can be gobbled up in so hurried a manner, making anything a potential event, but that’s not the intent of the original scheduling, which still counts for something, or ought to. I don’t think networks are ready to concede that their first-run prime-time real estate is nothing more than a shelf on which to display fresh product intended to be enjoyed at some non-specific future time, like DVDs on a shelf at Target or anything in a Netflix queue.