Suddenly, The World Can't Get Enough Of 'Full House' 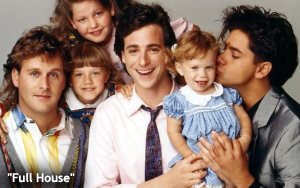 The latest news from “Full House” Nation is the story that came out yesterday that Lifetime is greenlighting a TV movie about the making of the series, with actors playing the parts of the various cast members.

Lifetime did this previously with a “Saved By the Bell” TV movie, and similar TV movies have been produced in the same vein for other shows such as “Diff’rent Strokes.”

This “Full House” TV movie comes hot on the heels of the other big “Full House” story, that Netflix is spearheading the making of a new, updated series called “Fuller House” that will supposedly include various original cast members.

Not among the returnees, according to reports: The grown-up Olsen twins, Ashley and Mary-Kate, who alternately played the toddler Michelle. They seem to be avoiding this new round of “Full House”-mania, probably because they have become ultra-rich, fashion-industry jetsetters who don’t exactly need to work in a remake of their old childhood sitcom to make a living.

And what’s with all of this “Full House” love, anyhow? The answer: Millennials, the hot target audience for everyone who is selling anything today. Millennials apparently feel a great deal of affection and nostalgia for “Full House.” The show was a big part of their childhoods, first airing on ABC for eight seasons (1987-95) and then continuing to air for years (and to this very day, in fact) in rerun syndication.

Marketers and TV producers are very much in tune with these millennials. Just yesterday, the point was made at Yahoo’s NewFront presentation in New York when the online company announced it is producing a new, original sitcom called “The Pursuit” (as in “the pursuit of happiness”) about a group of twenty-something strivers living in New York City.

In explaining the show, Yahoo Chief Marketing Officer Kathy Savitt positioned it as a modern-day version of “Friends.” That show about a group of twenty-somethings living in New York City not only appealed to young audiences in its original run on NBC (1994-2004), but it is widely binge-watched today by millennials, at least, according to Savitt.

In passing, she noted another sitcom from that same era that also apparently scores well with millennials: “The Fresh Prince of Bel-Air.” Does this mean we’re due for a “Fresh Prince” revival too?

It could be -- but let’s hope not. These shows were never great TV shows, despite the warm and fuzzy feelings that some people of a certain age might have for them. And if they do possess these feelings, it’s for the old shows as they were then -- not for how they may be remade today.

My own experience with the TV shows I grew up with illustrates this point (although readers of this blog are welcome to disagree). I sometimes enjoy watching the old shows when I come upon them on Nick at Nite or TV Land or any of those TV oldies channels that have proliferated recently (and that I wrote about a few weeks ago). But the idea of watching some kind of updated version of “Gilligan’s Island,” “Sanford & Son” or “Diff’rent Strokes” holds no appeal to me whatsoever.

Whether they were good or bad, critically acclaimed or universally panned, the TV shows of our youth are remembered fondly in no small part because of the environment in which we first watched them, at home in the warm embrace of our childhoods.

Or if they were not experienced during our childhoods, they hold some resonance or connection to whatever time period they were made in. For me, one example of this type of show was “The Osbournes,” which aired on MTV from 2002 to 2005 and helped usher in the era of celebrity-family reality shows. It was a great show and probably the best of its kind that has ever aired. Cut to the present day and an attempt to revive “The Osbournes” -- this time for VH-1 -- has reportedly died in the development stage

It’s just as well. The first “Osbournes” was like catching lightning in a bottle. In the TV business, such lightning rarely, if ever, strikes twice -- whether you’re remaking “The Osbournes” or turning “Full House” into “Fuller House.”