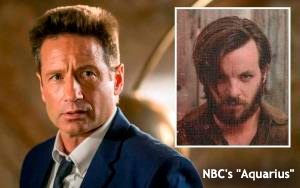 NBC’s “Aquarius” is an exercise in making a terrible chapter in the history of American crime palatable for a young, modern, squeamish audience for whom the 1960s is as remote as the 19th century.

You can start with this show’s pretty-boy Charles Manson. Embodied by actor Gethin Anthony, this 2015 version of Charlie is done up like a bearded Brooklyn hipster. The only thing he’s missing is a knit woolen cap like the ones the kids wear indoors these days no matter what the temperature. (That’s Anthony as Manson in the inset photo -- along with David Duchovny -- in the photo accompanying this blog.)

Sure, this new Charlie is a criminal -- a thief, a manipulator of teenage girls who he recruits to join his “family” and who he exploits sexually. Manson has long been described in the lore of the 1960s as “charismatic,” but also a maniac and a psychopath. In “Aquarius,” the character is none of these things. He is, however, better looking than the real Manson. I’ll give him that.

“Aquarius” picks up the Manson story in 1967, with a fictional L.A. police detective named Hodiak (played by David Duchovny) searching for the missing teenage daughter of a well-connected but sinister California politico. The year is important because it’s two years before the Manson family committed the multiple murders that would make them infamous.

Over the course of this 13-episode “event” series, the search for the missing girl will eventually bring the cop -- a practitioner of old-school police tactics such as beating confessions and intel out of suspects and informers -- into contact with Manson, who is positioned in “Aquarius” as an example of the 1960s free-love counterculture who stands in direct opposition to Duchovny’s cop character.

Make no mistake: The Manson of “Aquarius” is not some likable paragon of the flower power era. He is depicted rightfully as a loathsome creep. It’s just that the portrayal lacks a layer of menace that would seem to be crucial to any depiction of Charles Manson.

But this miniseries is not designed to be truthful or accurate. Instead, the story it tells is blatantly fictional, even if it is based very loosely on the Manson story and the Svengali-like hold he apparently exerted over vulnerable teenagers (mostly female but some males too).

The makers of “Aquarius” strove mightily to re-create the aura of the 1960s. There’s period music to spare, and young people in the miniseries walk the streets and sidewalks of Los Angeles in fringy outfits and bare feet, while casually offering each other “grass” to smoke at “wild” parties.

To those of us old enough to remember the real 1960s, “Aquarius” plays like one long cliché that falls far short of re-creating the 1960s except in the most superficial sense. But this miniseries wasn’t made for us. It was made for younger viewers born decades afterward who dig the fashions of the era and who might even have a passing interest in the music -- even if they have only the vaguest idea what the decade was all about.

In fact, “Aquarius” might even be this target audience’s first-ever encounter with the Manson story. And if that’s the case, then I suggest they go and learn about the real thing -- pick up a copy of the book “Helter Skelter” or watch either of the two versions of “Helter Skelter” that were made into TV movies in 1976 and 2004.

After they learn what Manson and his followers did, they might begin to feel as I do, that making a fictionalized, sanitized version of the Manson story is not only tasteless, but it does a grave injustice to the victims of Manson’s crimes and the many lives and families he is responsible for destroying.

“Aquarius” premieres Thursday night (May 28) at 9 Eastern on NBC.