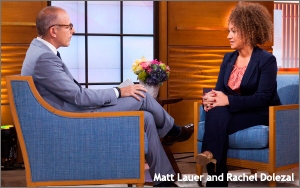 Today, I am self-identifying as a smug know-it-all because I guessed days ago that the now-former president of the NAACP’s Spokane chapter would eventually get around to defending her apparent race masquerade as mere “self-identification.”

And if she has chosen to “self-identify” as an African-American woman, who are we to judge her? The concept of self-identification -- as whatever a person feels like being despite any inconvenient truths about his or her actual physical makeup -- is widely accepted today, so why shouldn’t Rachel Dolezal be permitted to “be” an African-American women if that’s what she says she wants to be?

“I identify as black,” she said Tuesday morning on “The Today Show” on NBC. That quote instantly became the insta-headline on most of the insta-coverage of the interview -- her first since it was revealed earlier this month that she was birthed from 100 percent Caucasian parents, but has long referred to herself as a black woman. In the aftermath of the revelations, she resigned Monday from the NAACP, then flew to New York to be interviewed by Matt Lauer on “Today.”

In the live interview lasting a little over 10 minutes, Dolezal used the word “identify” or some variation of it at least 10 times. For his part, Lauer used the word in some form or another at least five times, by my count.

“Did [the fallout following the revelations about her race] come as a surprise to you or did you always expect that the lid would be blown off of your story at some point?” Lauer asked her at the outset of the interview.

“I did feel that at some point I would need to address the complexity of my identity,” she answered carefully.

“Are you an African-American woman?” Lauer asked.

“I identify as black,” she answered, igniting the aforementioned insta-furor of insta-journalism.

Elsewhere in the interview, Dolezal revealed that she has been self-identifying as African-American ever since she was a small child, when she drew self-portraits depicting herself as a black person -- or, as she put it: “I was drawing self-portraits with the brown crayon instead of the peach crayon.”

She didn’t like it when Lauer asked a question that characterized her “self-identification” as “deceiving people,” and later called the criticism that’s been leveled at her over the past week “vicious and inhumane.” She told Lauer that her two adopted African-American sons -- Isaiah and Franklin, who joined her for the trip to “The Today Show” -- consider her to be “racially human” and “culturally black.” “I know that they support how I identify,” she said of her sons.

She said she hopes her self-identification story would ignite a discussion about “ethnicity” and other related topics she invoked with phrases that I have a feeling are more familiar to those who have been exposed to them on college campuses in recent years, but not to those of us who have not set foot in a lecture hall since the 1980s.

“The discussion’s really about what it is to be human,” she said, “and I hope that that really can drive at the core of definitions of race, ethnicity, culture, self-determination, personal agency and ultimately empowerment.”

She even used the word “transracial” in the interview in a reference to how some people described her at an earlier point in her career as a human rights activist.

“Transracial,” “transgender” -- it’s all a great big self-identification soup these days, isn’t it? In fact, when I pondered what I predicted would be Dolezal’s eventual resort to the vocabulary of self-identification, I couldn’t help but think about Bruce Jenner and his (now her) own self-identification as a woman – feelings he said he harbored since childhood too. Everyone has pretty much accepted Jenner’s self-identifying transformation to Caitlyn and now fully supports her.

Rachel Dolezal’s self-identification, however, has not gone over as easily as Jenner’s, to say the least.