Even Without An Actual Show, Trump's Still A Reality TV Star 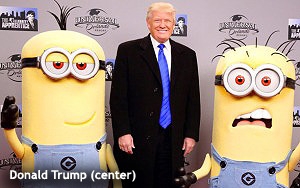 “Keeping Up With Trump” could be the title of the continuing televised saga of Donald Trump’s run for the presidency.

For the past two or three decades, this is a guy who has never exactly been invisible when it comes to drawing the attention of television cameras and news media. But the exposure he’s getting now is breathtaking.

Some might argue that the spotlight is shining on Trump for all the wrong reasons -- his off-the-cuff dismissal of Sen. John McCain’s Vietnam War heroism, for example, or the disparaging remarks about Mexicans he made when he announced his candidacy in June, including his now-infamous contention that many Mexican immigrants are “rapists.”

But if an ability to absorb media criticism and derision is to be considered one of the hallmarks of leadership, then Trump gives the impression of passing this particular test with flying colors --  despite the loud chorus of opposition emanating almost constantly from indignant op-ed columnists, gleeful TV comedians and groups that feel he has insulted them (veterans and Mexicans, for example).

Despite the brickbats, Trump doesn't really even flinch. For some reason, in the wake of this week's calls for Trump to quit the race in the wake of his McCain remarks last weekend, my mind free-associated to the incident in which President Bush suddenly became the target of thrown shoes during a press op in Baghdad in 2008, and he deftly dodged the flying footwear.

In the same situation, you can almost imagine Trump just standing there and letting the shoes either bounce right off of him or just letting them whiz by, in the midst of which he would simply continue to insist that he is right about Mexicans and McCain.

Remember “the Teflon Don,” the nickname once hung on John Gotti following his acquittals on various racketeering charges? Well, meet The Teflon Donald. Far from folding up his tent and withdrawing from contention this week following the McCain comments, Trump soldiered on, refusing to apologize and taking every opportunity he was offered to steer the conversation away from John McCain's war record and toward the subject of the federal government's neglect of veterans.

Trump adopted a similar strategy when he ventured to the Mexican border on Thursday. Instead of mounting some sort of an effort to put the issue of Mexican immigration and his “rapists” remark behind him, Trump went right to the scene to talk even more about this issue. The visit was widely covered on TV.

Far from harming his campaign, Trump's refusal to backtrack or apologize on these issues (or any others) only seems to make him more popular. In an interview the other night on “The O'Reilly Factor” on Fox News, for example, O'Reilly tried mightily to get Trump to admit he misspoke when he implied that McCain was somehow less of a hero because “got caught” by the North Vietnamese, as if a real hero would have found some way to evade capture. Trump made no such admission.

Seemingly as a result of this defiant stance he takes, Trump appears to have emerged as the leading Republican contender for the nomination. Whether it’s true or not, whenever he is mentioned in news accounts, it's often as “the Republican frontrunner” or “the leader among Republican hopefuls in current opinion polls” and the like.

To those who oppose him -- whether it's the other Republican challengers or Hillary Clinton or Jon Stewart -- Trump's making all the wrong moves, doing all the stuff that conventional wisdom tells prospective presidential candidates not to do.

Among these is his near-constant granting of interviews. In stark contrast to almost every other candidate -- most notably the tight-lipped Hillary -- Trump is the most visible personality out there not only because of his penchant for uttering headline-making statements on a slow-news Saturday in the summer (the McCain remarks, for example) but because he has no problem at all going on TV. In fact, he thrives on it, and appears to have adopted a strategy based on frequency -- the more he appears on TV, the more his popularity grows.

And that's despite the best efforts of the opposition to ridicule him. For example, Jon Stewart has greeted Trump's various statements as gifts from the comedy gods. “Donald Trump, the patron saint of comedians who are just running out the clock!” is how Stewart (whose last “Daily Show” is Aug. 6) described Trump recently.

But rather than disparage Stewart, Trump told an interviewer a few days ago that he “likes” Stewart. “They are begging me to go on” Stewart's final “Daily Show,” Trump insisted.

How long can this free-wheeling reality show called “Keeping Up With Trump” continue? Well, tomorrow is another summer Saturday, and anything can happen.