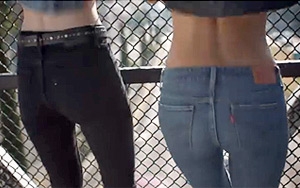 It only seems like yoga pants have taken over the world: A new report says denim may be climbing out of its doldrums, led by enthusiastic Millennials. The NPD Group says that while sales of jeans have continued their tumble, down 5% in dollar sales in the 12-month period ended in May, Gen Y spending on denim is up 2%. And among older Millennials, those between 25 and 34, sales jumped an impressive 13%.

“Denim is facing a real opportunity to build on past and present success with subtle strategic changes,” writes Marshal Cohen, NPD’s chief industry analyst in the report. “While the industry is not yet in a state of recovery, brands are focusing their energy on the younger customer base, where jeans sales are growing.”

It’s not that the rest of America doesn’t appreciate denim. NPD says 63% of people it surveyed say they love their jeans. They’re just not buying new ones, with just 32% reporting that they’ve bought themselves a new pair in the last five months.

Cohen writes that brands themselves are part of the problem: About 25% say it’s hard for them to find jeans they like, or that fit well. “There are missed opportunities across the denim retail landscape, from the limited distribution of classic styles, fuller cuts, and peripheral specialty sizes, to the absence of color that is living large in so many other industries,” says Cohen.

Levi Strauss is one company trying hard to cash in on that opportunity. Describing the just-released fall collection as a “full global reset” of its women’s line, the company promises that its technology, including improved stretch and recovery in fabrics, “has created the perfect fitting jean for each body type.” It recently launched “Live in Levi’s” campaign for its new women’s collection from FCB West, featuring singer Alicia Keyes.

Other denim brands hoping to latch onto that enthusiasm include Jordache, with a new campaign featuring actress Sarah Jessica Parker, and New York & Co., which has a new campaign starring singer Jennifer Hudson.