In Playful Switch, KFC Brings in Norm Macdonald As 'The Colonel' 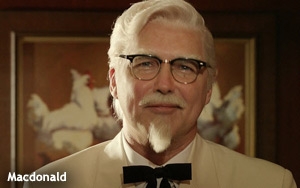 After just three months, KFC is not only "refreshing" its new campaign reviving the Colonel Sanders character, it's throwing consumers a playful curve by changing the comedian playing the Colonel.

KFC and agency Wieden + Kennedy launched the rebranding campaign in May, with "Saturday Night Live" alum Darrell Hammond playing the Colonel as a jocular, eccentric (some thought creepy) guy who hums, mutters and emits rasping laughs as he strolls highways and public spaces.

Now, in four new TV spots focused on launching KFC's $20 Family Fill Up Meal, the Colonel is being played by another SNL alum, Norm Macdonald — who insists that he's the "real" Colonel and that the guy in the previous commercials is an impostor.

Macdonald takes a lower-key, more tongue-in-cheek approach to the role that fits with the self-referential, nod-and-a-wink tone of these spots' copy. In one, for instance, he says: "They can't just grab any super-funny Hollywood actor, throw a white suit on him and try to pass him off as the real Colonel Sanders. And I should know, because I am Colonel Sanders."

The brand's marketing team is also having fun with the ironic tone.

"Other than not quite looking like him, his voice being different, and his inability to cook the world's best chicken, we thought Norm was the perfect choice to play the Real Colonel," said KFC U.S. CMO Kevin Hochman, in the release announcing the new meal and the second leg of the rebranding campaign.

All four spots are viewable on KFC's YouTube page.

4 comments about "In Playful Switch, KFC Brings in Norm Macdonald As 'The Colonel'".
Check to receive email when comments are posted.
Read more comments >
Next story loading