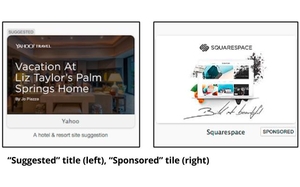 In the battle for digital advertising turf, the focus is shifting from ad servers to browsers. Much of that focus recently has been on the role of ad blockers, as well as publishers attempts to introduce ad blocker blockers, but software developer Mozilla hopes to transform the browser experience into more of an opportunity than an impediment for advertisers. It’s taking baby steps that may seem painfully slow to outsiders eyeing the potential to tap the humongous audience reach of its Firefox browser, but the company prides itself on user control and privacy and wants to ensure the experience is a good one for users and advertisers alike before rolling it out more aggressively.

“We’re not like any Web property out there,” explains Darren Herman, the Madison Avenue wunderkind who joined Mozilla a couple of years ago from Chief Digital Media Officer at The Media Kitchen to develop opportunities with the ad industry.

According to Herman, that is not only virgin territory for advertisers and content partners alike, but is a new way of thinking about screen impressions from a user’s point-of-view. While it is an impression rendered on a page, it’s not being served by an ad server but enabled explicitly by the native browser software. As such, Mozilla’s development team believes sponsorships should grow out of the browsing experience and its initial foray into sponsorship is looks more like a user discovery process than the kind of full-frontal assaults Madison Avenue is normally used to.

That said, Mozilla is leveraging the same powerful behavioral targeting technologies used by the most aggressive Madison Avenue ad technology developers. It’s just using it to enhance the user’s experience first, and the sponsor’s second.

The whole program emanates around FIrefox’s so-called “tiles,” the screen showcasing thumbnails of eight possible destinations when a user clicks on a new tab during a browser session, or when a new user comes to the browser for the first time. In both cases, Mozilla wants to enhance the user’s navigation experience by offering content that would potentially interest them. In the case of recurring users opening new tabs, the tiles programm simply makes recommendations on preferred content of a preferred partner a user might want to check out based on their recent browsing history. Mozilla calls these “suggested” tiles, and to date has not sold them as sponsorships.

While a “business relationship” exists between Mozilla and its “suggested” tile content partners, it is currently 100% a content licensing agreement tied to the user’s browsing history. The only place Mozilla currently sells actual sponsorships is during a new user’s session -- either a first-time user that has installed Firefox for the first time or a returning user who has dumped their browsing history. Because there is no browsing history associated with these users, Mozilla feels those tiles are a good place to experiment with subtle forms of sponsorship from select partners. Those sponsorships which have been bought by companies such as website developer Squarespace, the NFL and others, are paid for and are explicitly labeled as “sponsored” content.

Herman would not disclose the terms associated with those kinds of deals, but he says Mozilla wants to begin talking to other big brands and agencies about potential ways of leveraging the browser experience as an advertising medium, vs. the heavily cluttered -- and increasingly problematic -- marketplace of website based advertising experiences.

While the tiles program is still relatively new and considered a test, Herman says the sponsored tiles have performed exceedingly well for the partners that have used it to date. He said he could not release specific numbers, but he said the “engagement rates and the clickthrough rates we are seeing are performing at a pace that’s on part with paid search campaigns.”

Herman concedes that those results may be due partly to the newness and novelty of the program, but he says Mozilla’s plan is to keep the experience clean and uncluttered for both users and sponsors over time so that there isn’t any wear-out.

“It’s not a Web page. It’s a super clean experience. There is no issue of viewability, no fraud and it’s non-scrollable,” he notes, asserting that the only constraint is how far Mozilla “monetizes it without harming users.

“Would we become the next NASCAR? No,” he says, alluding to the cluttered sponsorship environment of the racecar sport.

While Mozilla may never become NASCAR, it’s not without potential scale. Currently, Firefox has about a 12% share of the global browser software marketplace, and with its focus on improving user experiences, the company hopes to grow that soon.
Next story loading