New 'Power Of Dreams' Spot An Illustration Of Honda 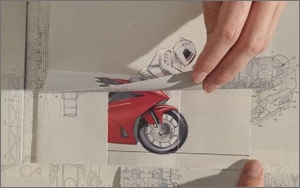 “The Power of Dreams” continues, as Honda returns with the latest exercise in its campaign that tells viewers about all the things the company makes — from engines to motorcycles, to cars, planes and robots.

As in an earlier ad from the global campaign, Wieden + Kennedy, London’s “Hands,” (a multi-award winner that has gotten over 15 million views), it manages to get that idea across by having hands “create” the life of the brand; the implication is that it is people, after all, that make it all go.

The new two-minute spot for the U.S. market, via U.S. agency of record RPA, and touting Honda's R&D acumen and technological prescience, uses stop motion and hand-drawn and colored illustrations. Lots and lots of them drawn in sequence by different artists. They come to life as hands flip them, toss them around, shuffle them, moving the action forward over a hand-drawn landscape.

Honda says the ad, shot by influencer and Academy Award-nominated PES, took months to make, with literally thousands of pictures. Tom Peyton, assistant VP of marketing for American Honda said, in a statement, that the video is a meta-textual: a statement in itself of Honda's innovative ideas. “The goal is for the marketing itself to become a demonstration of Honda thinking and all the people that touch our wide range of products along the way.” The automaker has generated a huge following for similar impressive feats of idiosyncratic whimsy — 2003’s “cog” ad, for example, also via W+K’s London unit —  that clearly involved a lot of pondering and experimentation. The cog spot famously required over 600 takes.

The spot opens with Honda founder Soichiro Honda’s use of a radio generator to power his wife’s bicycle, with the illustrations on weathered paper. The story continues with Honda’s development of motorcycles including bikes that won the Isle of Man TT races; then outboard motors and then to the first CVCC vehicle.

Then comes generations of the Civic and Accord, leading up to the 2016 Pilot, the F1 and Indy racing engines and, of course, the ASIMO robot, and the Honda Jet. The paper on which the illustrations are drawn get more contemporary as well. The ad super says “You never know where a dream will lead you.” It directs viewers to an interactive version that goes more deeply into each product shown, where clicking a product triggers a pop-up, allowing users to see the real product, and explore its history and significance to Honda.

Honda says the long-form spot will run on network TV on shows like “Dancing with the Stars,” “Rosewood,” “Minority Report,” and “Blue Bloods.” It will also air on ESPN during Saturday College Football. A 60-second version will air throughout October on NBC, CBS, Fox and ABC. In addition to TV, digital placements will occur on Facebook and YouTube. The “Paper” spot will be supported on Honda’s social channels with Twitter trivia, teaser clips on Instagram and Vine, Honda product images on Instagram and GIFs on Twitter, per the Torrance, Calif.-based automaker. There are also behind-the-scenes videos on how the spot was created, with commentary from PES