Bacardi Oakheart Gets Serious About Taking On Captain Morgan 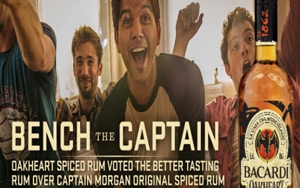 The creative declares that Oakheart won over Diageo's Captain Morgan in a national taste test (conducted in August by an independent research company, according to Bacardi).

The ads feature male-bonding scenarios like watching a game, and employ pumped-up taglines like "Bench the Captain" and "The Best Part of Gameday Isn't Always the Game."

They are running on digital (via programmatic buys), social, radio and out-of-home in key markets, according to the brand.

Bacardi says that Oakheart has grown "organically," to become "one of the top-selling spiced rums in the market" since its launch in 2011.

Last month, Bacardi launched a house party-themed campaign, aimed at young adults, for its flagship white rum. While still the #1 rum by volume in the U.S. (and worldwide), Bacardi Superior has seen sales decline in recent years, as smaller and cheaper rum brands have proliferated.

Captain Morgan Spiced Rum is the #2 rum in the U.S., but has also seen declining sales. Diageo launched Captain Morgan White Rum, intended to take on Bacardi, in the U.S. in February 2014, and has since introduced it in other markets, including the U.K.