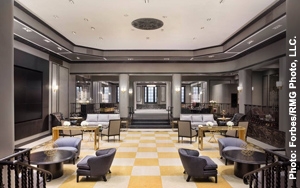 The 7,500 square foot Forbes on Fifth space will be the company's new Manhattan spot for "high-end entertaining and hosting curated events,” according to the company.

“These events will support the engines that drive our business, ranging from editorial events promoting our content and key franchises, such as 30 Under 30, to strategic marketing and advertising activities with current or potential partners,” said Laura Daunis, senior manager of corporate communications at Forbes Media, told Publishers Daily.

Forbes will also offer to host a content event at Forbes on Fifth for each BrandVoice Premium partner and will invite influencers to speak or attend. Most events will be in partnership with brands that do business and advertise with Forbes.

The architect, designer and decorator of Forbes on Fifth was Loffredo Brooks Architects, which also worked in conjunction with Ralph Lauren for the selection of key pieces of furniture. President and CEO of Forbes Media Mike Perlis referred to the space as “versatile” and “powerful.”

Forbes on Fifth consists of three primary entertaining areas: the main hall, a private dining room and a conference room for meetings.

The company’s previous office – 60 Fifth Avenue – had an art gallery where the company used to host events.