Judge Palin: From The Wilds of Alaska To The Wilds Of Daytime TV 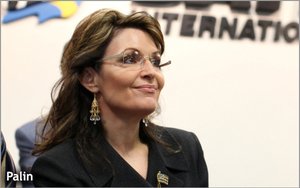 Sarah Palin, a woman known for her enjoyment of hunting and fishing in the wilds of Alaska, is now testing the waters of another wild kingdom -- daytime TV. Does she really know what she’s getting into?

Palin -- former Alaska governor, one-time candidate for vice president and a rootin’ tootin’ rabble-rouser for conservative causes -- wants to be a judge on a TV court show. It could be a lucrative gig if she can make it work, but one that requires that she wade into a region that in many ways represents the low-rent district of traditional broadcast TV.

Not that there’s anything wrong with that. After all, I am not a snob. Plus, there is apparently plenty of money to be made in first-run, daytime syndication for the select few -- studios, distributors, exceptional air talent -- who can make it work.

But the thing I always say when some unsuspecting public personality starts eyeing daytime TV as a road to riches is this: You might not be prepared for the kinds of people you’re going to rub up against there.

What’s the world of daytime TV really like? Well, for the most part, it’s the place to go for people who wish to settle their conflicts on television -- with ex-friends, estranged spouses, various relatives and a seemingly endless parade of landlords.

And that’s just the court shows. On the far end of the daytime spectrum there are the stalwart ringmasters Jerry Springer and Maury Povich, whose shows specialize in out-and-out brawls (Springer) and paternity tests (Povich). Both of these shows have lasted forever and made everyone associated with them very wealthy.

It should be noted that there are exceptions to the conflict shows that dominate daytime. “The Ellen DeGeneres Show” is one of them. The upcoming Harry Connick daytime show (distributed by NBC Universal) could be another if it succeeds after its launch next September.

The prospect of striking it rich is likely the prime mover for Sarah Palin’s decision to explore the possibility of transforming herself into a TV court show judge. When these things succeed, the rewards are fat paychecks and regular employment. At age 52, Palin might prefer that kind of a future over whatever it is she does now.

The news that Palin is being measured for judicial robes for daytime TV broke Tuesday on People magazine’s Web site and then trended -- as most news about Palin does. The sheer breadth of the reaction -- no matter whether it was pro or con -- encouraged some of the people involved in this Palin project to believe that they are on the right track with this.

A great deal of the reaction was negative, however, which comes with the territory whenever Palin pokes her head out in public. There were the usual dismissive tweets along the lines of “Her again? Enough already!” And there were many others who complained that Palin has had no experience as an actual judge (as most of the TV judges have had) and for that matter, has little firsthand knowledge of civil law since she’s not a lawyer either.

Some people even griped that Palin’s “appointment” to a TV judgeship -- in a fake court, mind you -- is a travesty that will further degrade our justice system. Reminder to these people: Palin’s TV court is not real. It bears no relation to any actual court system except that it looks like one. And that’s a set, in a studio, not a courthouse.

The people behind this Palin judge-show idea feel that her lack of legal bona fides will not matter, that she will thrive as a TV court-show judge because she’s outspoken and opinionated.

My own impression (and I’m not alone in this) is that, yes, Palin is nothing if not outspoken, but she can also be incredibly inarticulate -- which is not a trait that will help her to play the role of courtroom authority figure on a daily television show. She’s the queen of long run-on sentences, and an occasional mangler of words such as the time she famously made up the word “refudiate” in a tweet she posted on Twitter. As is customary for her, that gaffe drew a mother lode of attention.

Acting the part of a judge on TV might not be so easy. One reason “Judge Judy” works is because Judy Scheindlin was a judge for years, so for her, assuming the role on TV was no big stretch. As a result, viewers who watch “Judge Judy” are thoroughly convinced from the get-go that they’re watching a real judge who knows her business.

If they tune in to watch Judge Sarah Palin, they’ll likely be doing it to see what crazy stuff she’ll say in the process of meting out what will likely be a very unique brand of Palin justice.

Speaking of justice, if Palin’s turn toward a career in daytime TV bears fruit for her and she stays with it, then her career in politics would likely be over. This is America, and we’re not about to start electing reality-TV stars to high office, are we?

politics, tv
1 comment about "Judge Palin: From The Wilds of Alaska To The Wilds Of Daytime TV".
Check to receive email when comments are posted.
Next story loading