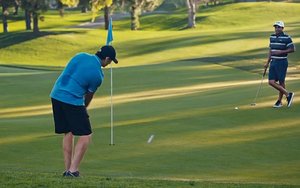 Golfsmith is swinging into golf season with a campaign that reminds aficionados of everything they’ve been missing: Beautiful fairways and terrible shots. But it’s also got a friendly “it’s okay to play badly” message for the millions who have never wielded a club.

TV spots are aimed at golfers of all levels, and poke fun at the ways they torment themselves, blaming clubs, the wind, and mostly, themselves. (“Take it easy on Steve, Steve,” the voiceover says soothingly.)

And it represents a change for the Austin, Tex.-based retailer. “Our previous focus had been on Golfsmith as a brand, and now we are making a shift to highlight that we are a house of many great golf brands,” says Kim Lewis, Golfsmith’s VP of omni-channel marketing.

The campaign, from Austin-based Preacher, includes 15-second spots airing on the Golf Channel, during live golf tournaments, and in programming on TV. The full 60-second version is running in digital channels, and print is appearing in enthusiast magazines. It’s also using the ads in its paid social strategy. The campaign was timed to break with the Masters, the unofficial kick-off of the golf season.

Golfsmith is the largest specialty golf retailer in the world, with 160 shops, and privately held.

And there are signs that this may be a big year for the golf business. The long decline in participation continues—something many in the industry have chalked up to Gen Y’s indifference to the sport. But research from the National Golf Foundation finds that “as Millennials earn more money, they play more golf,” it says in a recent analysis. “We expect this ‘delay effect’ to continue, and anticipate that as this generation ages, golf participation will gradually increase.”

It points out that some six million Millennials are golfing, about one in four are participants, and that they spend about $1 billion a year. And another 12 million are interested in playing, even if they’ve delayed participation so far. Overall, the NGF says interest in golf is at an all-time high, with some 37 million people expressing interested in giving golf a try.

Part of the appeal, explains Barry Janoff, executive editor of NYsportsjournalism.com, stems from watching the pros. In the post-Tiger Woods era, “it’s no longer one guy winning all the time, but a number of athletes vying for the top spot.” Whether it’s Nike spending big on Rory McIlroy, Under Armour on Jordan Spieth or Adidas on Jason Day, “it opens up the field.”

And with so many people open to the idea of golfing, she says the new campaign’s emphasis on the game’s social nature is also important. “Golf can be fun, even if you’re not a pro-level player.”