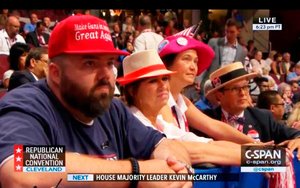 So much has been speculated about the lessons of showmanship that Donald Trump supposedly learned from his experience as a TV star that it’s shocking to watch the Republican Convention for two consecutive nights and find it lacking in any kind of TV showmanship whatsoever.

So far, it has been deadly dull -- basically a parade of boring speechmakers speaking to an audience whose minds seem to be elsewhere.

Sure, there have been moments, far and few between as they are, in which the audience seems to be paying attention. But in many of the crowd shots shown on TV, the convention audience has been seen mostly just sitting there staring into space, some yawning, others on their cell phones, and some gamely waving signs that say “Make America Great Again” or some variation of the Trump campaign slogan.

For example, the hat being worn by one of the convention attendees in the screen-grab photo accompanying this blog post reads: “Make Guns in America Great Again,” whatever that’s supposed to mean.

The monotony of the speaker lineup seems like a waste of a prime-time opportunity. It’s almost as if the planners of this event have no awareness of what they’ve been given, which is: All three hours of prime-time TV (one hour on the broadcast networks) and the rapt attention of the nation’s news media and their cameras and equipment for four nights in a row -- all at a time of year when there’s really nothing else on.

Their failing seems to be this: They do not seem to perceive their convention as, essentially, a live television show, the goal of which should be to entertain, excite and galvanize their audience both in the convention venue itself and at home.

Here’s what they should do:

First, they need to warm up this audience. TV shows do this all the time. They have a person -- often a comedian or entertainer with experience in this very specialized task -- who instructs the audience on what is expected of them before the show starts. At a political convention, this warm-up specialist should impress upon them the importance of their energy and participation and how it will play to the audiences watching at home.

They might even consider having applause signs (although I suppose these might be “seen” by network cameras and then derided) or to make audience members aware of other signals -- often conveyed off-camera by the warm-up specialist -- that they should watch for as guides to how the producers and directors of this show need them to comport themselves at key moments.

Or if a system of signals is impractical, they should just generally be instructed to smile, cheer and exhibit over-the-top excitement at all times. And someone should hang some mikes over the audience to pick it all up too.

This would help bridge what I call “the enthusiasm gap” between the speakers and the audience, whose actions (or inactions) don’t seem to be in sync with the message some of the speakers -- such as Donald Trump Jr. on Tuesday night -- are trying to get across, that this year’s presidential election is of historic, do-or-die importance.

And of course, some of the speakers should not have appeared. One example from Tuesday night would be the woman identified as the general manager of the Trump Winery, Kerry Woolard. For all I know, she’s the most competent winery executive who ever fermented a grape, but she was instant tune-out bait. It reminded me of those moments during the Oscars when the president of the Motion Picture Academy, or some other luminary no one cares about, comes on stage to make a speech and most of America uses that moment to go and take a bathroom break.

Instead, the lineup of segments in the prime-time portions of the political convention should be laid out like a TV show, including -- dare I say it -- entertainment segments. These could include everything from high school bands to A-list comedians appearing between some of the headlining speakers.

Which is not to say that a televised convention should feature troupes of plate-spinners and jugglers inserted in the program to lighten it up. But some entertainment of some kind would give viewers a reason to stay tuned, and help build a more positive, optimistic image for the GOP, which too often is seen as the party of gloom and doom.

Generally speaking, the great challenge for producers of political conventions is this: Produce a show that is too interesting for the news channels to cut away from the action in favor of their panels of talking heads. This is why both parties should do away with extraneous speakers. It just gives the news media an excuse to turn their cameras back on themselves, which is what they prefer to do at all times.