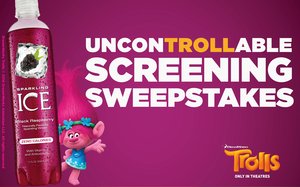 Sparkling Ice is going well beyond the usual movie tie-ins in its new campaign based on a partnership with DreamWorks Animation’s upcoming “Trolls.”

The “UnconTROLLable Flavor” campaign, launched in the lead-up to the movie’s Nov. 4 premiere, boasts limited-edition “coloring can” packaging, a dedicated rewards program and interactive in-store promotions, in addition to a sweepstakes, advertising and other elements.

Kids and adults can color directly on the 8-ounce cans in the special, Trolls-themed packs of the soda, and share snaps of their creations on Sparkling Ice’s Facebook page or by using the hashtag #UnconTROLLableFlavor.

In the campaign’s rewards program, Sparkling Ice purchases earn points toward movie-related rewards, including movie tickets, concession cash, music downloads and branded merchandise. More than 3,000 rewards will be given out over the program’s three-month duration.

The rewards program is being promoted in-store with point-of-sale materials that allow consumers to interact with the movie’s characters.

The campaign’s sweepstakes, open only to consumers 18 and older, offers a grand prize of a private screening of “Trolls,” for 100 people, in the winner’s home town. Entry is through Facebook.

Television ads will run locally and nationally on major networks. A series of magazine inserts inspired by the special cans, running in key markets, will encourage readers to color the pages and share them on social media.

Sparkling Ice will also offer samples in the special cans at colleges, community and fitness events and classes across the country.

“Like the Trolls, Sparkling Ice is a brand that encourages individuality and embraces the different personalities, flavors, and attitudes that ‘color our world,’” said Nina Morrison, VP of PR and community relations for the brand.

The movie’s story involves two trolls’ quest to save their village from troll-eating monsters, according to online reports. The characters are voiced by Anna Kendrick, Justin Timberlake, Russell Brand and James Corden, among others.