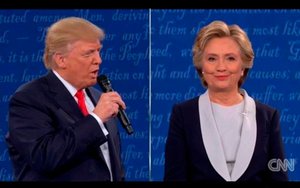 TV was the catalyst for this entire disgusting weekend.

You might say this new phase in this coarse presidential campaign was brought to you by NBC. It began Friday with the report of the interview outtake from 2005 in which Billy Bush and Donald Trump had a lewd conversation while ogling an actress on the set of “Days of Our Lives.”

Trump was the star of “The Apprentice” at the time and Bush was “interviewing” him for “Access Hollywood” -- another NBC property -- in order to promote a cameo appearance Trump was filming that day on “Days of Our Lives,” an NBC soap.

So Bush is now taking the fall. Minutes before Sunday night’s debate, the news broke that NBC was suspending him from “The Today Show,” where he had only recently taken up residence as the host of the show’s third hour (9-10 a.m. Eastern).

This Trump incident reveals Bush to be a lightweight when it comes to interviews, but you can hardly blame him. He cut his teeth on “Access Hollywood,” which requires that interviewers make nice with their celebrity subjects and basically accept whatever they say to them like they’re old chums. That’s what derailed Bush last summer when he interviewed Ryan Lochte on a beach in Rio and Lochte told him that made-up story about what supposedly happened at that Rio gas station. Anyway, Bush is toast.

But thanks to this lewd interview, TV had a subject it could sink its teeth into all weekend in order to whip up excitement for Sunday night’s second debate between Trump and Hillary Clinton.

And so, you had close to 48 hours of almost continuous discussions on the temporary sets the news channels erected at Washington University in St. Louis about the ramifications of this video. Hurricane Matthew became an afterthought relegated to five minutes of obligatory reportage every hour. Who needs Hurricane Matthew when you have Hurricane Trump?

Once again, the debate was treated like a sports event. CNN even positioned its pre-debate coverage with the title “Debate Night In America,” echoing the NBC Sunday night pregame show airing at around the same time, “Football Night In America.” Oh well, Rome had its gladiators, and we have this. It’s all the same spectacle, isn’t it?

NBC -- birthplace of this weekend’s mess -- was contractually obligated to air the Giants-Packers game, but the debate aired just about everywhere else (including MSNBC).

It was supposed to be a town hall-style debate -- or so we were led to believe -- with the lion’s share of the questioning given over to “real” people who had been pre-chosen to sit on stage with their little question cards in their hands in anticipation of their “big moment” on national TV.

But something funny happened on the way to this forum: Anderson Cooper and Martha Raddatz decided they would ask more questions than the ordinary people who were supposed to do it.

Upon reflection, one might wonder: If a “town hall” event is designed as an opportunity for ordinary folk to question the candidates, why were these moderators there at all? Probably because these star TV journalists think they’re smarter than everybody else. So in case the ordinary people ask stupid questions, the pros can ride in on their high horses to elevate the intelligence of the discussion.

As for the debate itself, hoping for an elevated discussion was an exercise in futility. The debate was so vicious, however, that it made for riveting television -- in that rubbernecking-at-an-accident kind of way. When it was over, you could at least say of this debate: Well, that was a fast 90 minutes -- faster than most of these things seem to be.

And it was nothing if not historic. Clinton came right out and declared that Trump was unfit for office. He told her that if he was president, she’d be in jail. This was presidential campaign combat on a whole new and different level.

Speaking of words we are not accustomed to hearing in our mass media, Trump’s comments about women in the Billy Bush interview emboldened various media into airing or publishing words that were formerly taboo -- most notably the p-word (slang for a woman’s genitalia) and the f-word. Thanks, Donald, NBC, Billy Bush, The New York Times, C-Span and others.

It was a few minutes after the debate ended, and C-Span -- like everybody else -- was into its post-debate analysis and reaction phase. That’s when I realized we’d turned a corner in the evolution of permissive language on television.

C-Span was reporting on a tweet posted during the debate by a man identified in various places as either an “advisor” or “foreign policy spokesman” for the Clinton campaign. He didn’t like a statement Trump made in the debate about Capt. Humayun Khan, a Muslim-American killed in action in Iraq in 2004. So in a tweet, he directed these words toward Trump: “Go f--- yourself”.