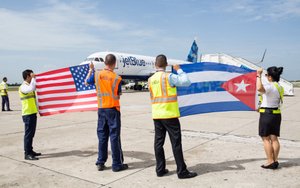 JetBlue flight 243 was the first commercial flight to Cuba from the New York area since scheduled service resumed this year and marked the first day of U.S. commercial service to the Cuban Capital in more than 50 years. The New York metropolitan area is home to the second-largest Cuban-American population in the U.S.

The launch of Havana service also marks a major milestone for JetBlue as the Cuban capital becomes the airline’s 100th destination in 22 countries.

JetBlue now serves four destinations in Cuba. With its inaugural flight to Santa Clara in August, JetBlue became the first U.S. carrier to operate commercial flights between the U.S. and Cuba in more than 50 years. Earlier this month, JetBlue began serving the cities of Camagüey and Holguín.

Other airlines flying from the U.S. to Cuba including Alaska, American, Delta, Frontier, Southwest, Spirit and United. Along with JetBlue, they plan to operate a combined 155 flights.

However, under President-Elect Donald Trump, the fate of the thaw between the United States and Cuba is far from clear. Mauricio Claver-Carone, a fierce critic of Cuba who leads a pro-embargo political action committee, has been named to Trump’s transition team for the Treasury Department. The move could indicate that Trump is considering altering the regulations that the current administration put in place to ease trade and commercial restrictions against Cuba.

But travel analyst Henry H. Harteveldt says it’s unlikely that the president-elect will try to stop commercial flights between the two countries.

“There is so much business opportunity in Cuba that if Trump tried to backtrack, the U.S. Chamber of Commerce would howl,” says Harteveldt, founder of Atmosphere Research Group. “I don't think we'll go backwards; what I suspect is that we may not see the same degree of progress.”

JetBlue is taking a number of steps unique to its Cuba launch to set it apart from competitors such as including Cuban government-required health insurance coverage for all travelers on all Cuba-bound flights so that customers do not have to worry about obtaining the insurance separately.

Under U.S. regulations, every customer traveling to Cuba must complete an affidavit affirming the customer is going for one of 12 reasons of approved travel from the U.S. Department of Treasury. JetBlue has built the completion of the affidavit right into the booking process so it can be finished in only a couple of clicks.

Separate from the U.S.-regulated 12 categories, Cuba requires visitors to obtain an entrance visa onto the island. For customers who qualify for a Cuban Tourist Visa (Tourist Card), JetBlue will make those available for purchase upon check-in at one of its gateway airports or at the gate for connecting customers on the day of travel. All travelers to Cuba should make their own determination with respect to the appropriate type of visa required by Cuba for their purpose of travel.