Man In The Middle: Tucker Carlson Is Safe Choice For Fox News 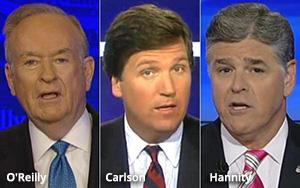 With Tucker Carlson, Fox News management has made a low-risk choice for the gaping vacancy in prime time resulting from Megyn Kelly’s dramatic defection to NBC this week.

The decision to move “Tucker Carlson Tonight” from 7 p.m. to 9 p.m. is surprising in two ways. First, Fox News execs moved faster than expected to fill the slot. Second, they did it without regard to expectations from some quarters that the replacement show for “The Kelly File” would be anchored by a woman.

The fast decision was unexpected. The news broke at midday Thursday, just two days after NBC News execs announced Kelly had signed with them. Her last day at Fox News Channel is tomorrow (Friday).

Rather than make a quick decision about her replacement, it seemed just as likely that Fox News management would now spend a few weeks not only considering a number of possibilities for a new prime-time show to replace “Kelly,” but might also have spent some time mulling over the very future direction of Fox News programming.

But they seemed to have done none of that. Instead, they did a very simple thing. They took a relatively new 7 p.m. show that is doing well and decided to just plunk it down in the 9 o’clock slot, starting next Monday.

And while some might complain that the insertion of Carlson between Bill O’Reilly at 8 and Sean Hannity at 10 flies in the face of our national obsession with gender equality and diversity, you could look at it another way -- that a decision having nothing to do with diversity is not only refreshing, but also true to the Fox News DNA.

From a business standpoint, moving Carlson into the time period is a shrewd decision. It bolsters the prime-time lineup with a show that is already on and proven in the ratings, and one that is anchored by a guy who has been around TV for about 20 years.

He’s a known quantity who will likely fit seamlessly into Fox’s prime-time lineup. It is likely the hope of Fox News management that Carlson will fit so well that “The Kelly File” will be quickly forgotten. That seems like a pretty good bet.

This decision seems to have been made in conformity with the way TV shows have traditionally been scheduled: You try and find shows that go well together. “The O’Reilly Factor” leading into “Tucker Carlson Tonight” leading into “Hannity” makes a great deal of sense.

In some ways, it makes more sense than “The Kelly File,” which was not necessarily compatible with those other shows. Instead, the success of that show was due mainly to the charisma and talent of Megyn Kelly.

In the absence of some new personality as luminous as she (the kind of talent that is rare and not easy to find), moving Carlson’s show is the right decision.

news, tv
1 comment about "Man In The Middle: Tucker Carlson Is Safe Choice For Fox News".
Check to receive email when comments are posted.
Next story loading