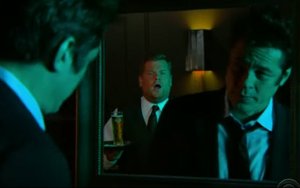 Heineken, already in the midst of a popular campaign starring Bencio Del Toro, from Publicis Worldwide, is expanding its celebrity vibe with a host of integrations on “The Late, Late Show” with James Corden.

The brand introduced its sponsorship in March with signage on the show’s on-set bar, where it’s also featured via bottle displays and branded barware. Heineken is being served to guests in the green room, as well as at the bar.

Last night, Heineken amped up its visibility with a guest appearance by Del Toro.

Corden showed a parody of the most recent Heineken ad, “The Look,” in which Corden replaces a sexy female bartender as the target of Del Toro’s sizzling gaze. The show clip (below) had generated more than 19,000 views on YouTube within its first few hours after posting. Heineken also ran two ads during the show.

The sponsorship will include frequent on-air integrations and call-outs, as well as digital integrations, according to the Diageo brand.

Those who miss the integrations during the show’s late-night airings will be able to look for them in the clips featured in the show’s area on the CBS site.