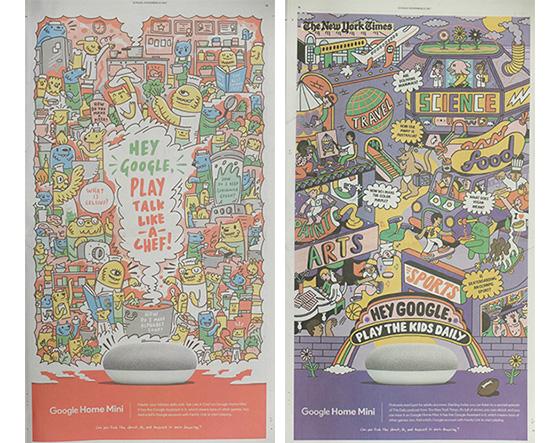 The New York Times will roll out a monthly print-only section for kids in 2018, but 10 national consumer groups say the Times should ban advertising from the section.

The Kids section debuted in May, with a second edition in the Sunday, Nov. 19 issue of the newspaper after positive feedback from readers.

The supplement mimics regular sections in the Times, with such topics as sports, national news, food, opinion and arts, and a mix of illustrations, photography and how-tos for young readers.

In the November Kids supplement, five of the 16 pages were full-page ads for Google Home Mini.

A coalition of 10 consumer groups — the Campaign for a Commercial-Free Childhood (CCFC), the Center for Digital Democracy, Consumer Action, the Consumer Federation of America, Consumer Watchdog, Corporate Accountability, New Dream, the Parent Coalition for Student Privacy, Public Citizen’s Commercial Alert and the Story of Stuff Project — sent a letter last week to the Times criticizing the newspaper for targeting kids with marketing.

The group claims the Google cartoon ads look like kids’ puzzles, and feature “a visual style quite similar to much of the editorial content of the supplement.”

“Since the advertisements were unfairly disguised as content, children probably didn’t know they were being targeted with marketing,” the letter reads.

The groups claim this is a violation of the Times’ own advertising policy and Children’s Advertising Review Unit guidelines, “which mandate a clear distinction between advertising and content,” stated David Monahan, campaign manager for the CCFC, an advocacy group aiming to limit marketing that targets kids.

A spokesperson for The New York Times told Publishers Daily: “Advertising helps support our ability to create special sections like this one. In fact, our first special kids section, which published in May 2017, also contained ads. The ads in question [in the November section] met our advertising acceptability standards and we do not believe there is any confusion that these pages are, in fact, ads.“

The ads in the May supplement of the Kids section were a version of the Times’ “Truth is Hard” brand campaign. It displayed the words “The truth is kids…” multiple times, followed by phrases such as “...want to be part of the conversation” and “...are smarter than you think,” ending with the line “The truth is kids can handle the truth.”

Monahan said he has not received a response from the Times.

“Today’s children will be better citizens tomorrow if they get in the habit of reading the newspaper,” stated Monahan. “But it’s wrong for the Times to tout an educational supplement and use it to target impressionable kids with deceptive marketing for Google.”

The groups behind the letter “urge” the Times to make future editions of the Kids section ad-free. The supplement becomes a regular monthly section in the Sunday paper starting Jan. 28.

“The Times Company must stop trying to monetize children in order to build new revenues for its brand,” stated Jeff Chester of the Center for Digital Democracy. “It diminishes its reputation by engaging in unprofessional practices towards kids in order to generate sales of ads from Google.”

The groups also take issue with the device being advertised. Monahan says the Google Home Mini is “an internet-connected device which could endanger children’s privacy and welfare.”

“You have helped Google target children with ads for an intrusive, always-listening, internet-connected device,” the letter reads.