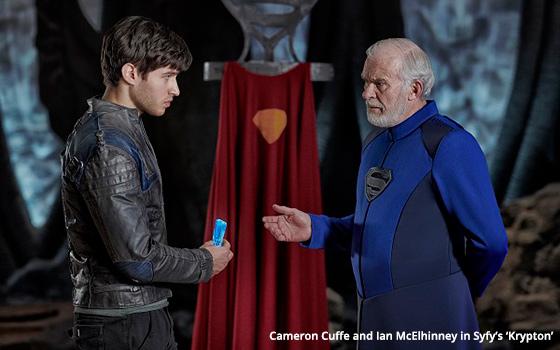 A piece of publicity copy for this new Syfy series called “Krypton” leads with a question: “What if Superman never existed?”

The answer is obvious: This new “Krypton” series would not exist either, and neither would all the other Superman movies and TV shows that have been produced since the 1940s.

That was not the answer the question was after, however. It was referring to the central storyline of “Krypton,” which is about the planet Krypton several generations before the birth of the planet's most famous émigré, Superman.

Since Kryptonians were extraordinarily long-lived, this would place the TV show's time frame about 200 years before Superman turned up on Earth (the first Superman comic book was published in 1938).

In this pre-Superman origin story, the extension of the El family line is in doubt, which throws the eventual birth of Superman into doubt as well. This is where Syfy's question originates.

For more on how this story comes together in the premiere episode of “Krypton” airing Wednesday night, please do not rely on this TV Blog.

The TV Blog nobly abhors spoilers and would never wish to undermine a viewing experience for anybody -- whether their interest in Superman is fanatical or just casual.

More importantly, this scenario is so complicated that it is (a) largely incomprehensible (at least to me) and (b) even if I did understand it, describing it here would use up just about all of the TV Blog's approximate daily word count.

But fear not. “Krypton” is a very good show, complications included. At its center is a young ancestor of Superman. He is 23 in the show, but he will eventually become Superman's grandfather.

He is played by a charismatic British actor named Cameron Cuffe, Most (if not all) of the cast of this show is British.

As depicted in the show, the planet of Krypton is no paradise. It is a totalitarian society ruled by a mysterious autocrat with three gold faces.

His acolytes form a class that gets to live literally above the rest of Krypton's inhabitants, who live down on terra firma in what look to be dark and dirty surroundings.

Among other things, the unnoble classes are beleaguered by curfews and garden-variety harassment by the three-faced ruler's security thugs. There happens to be a nascent revolutionary movement afoot that may involve Superman's future grandfather.

Fans of Superman will likely be the group that will be best served for this show. For anyone else, the 200-years-ago origins of Superman might not exactly be a subject they have dwelled on.

However, “Krypton” is a very good-looking TV show. The special effects used to create its various worlds -- from the lofty world of the “rankers” (nobility) to the homes of the lower castes -- are top-drawer. So are the performances.

The programmers at Syfy usually have a good eye and ear for this sort of thing. “Krypton” looks and sounds like another winner for them.