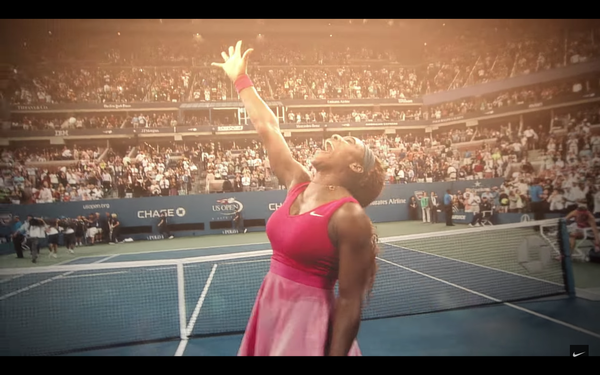 For its fiscal third quarter, revenues rose 7% to $9 billion, or 3% on a currency-neutral basis. For the Nike brand, sales climbed 4%, adjusted for currency exchange, to $8.5 billion. Percentage gains in international sales jumped in the double-digits. And while sales in North America declined 6%, the Beaverton, Ore.-based company says it’s seeing “a significant reversal” as innovations, products and retail experiences take hold.

Stepped-up spending on demand creation, up 15% in the quarter, is a major part of the equation, and a trend some observers expect to intensify. “These investments are clearly generating stronger sales results,” writes Christopher Svezia, an analyst who follows the company for Wedbush Securities. “Key initiatives designed to reignite Nike’s growth in North America and around the globe are gaining traction.”

The company posted a rare loss for the quarter, of $921 million, due charges related to new tax laws.

It kicked off its conference calls for investors with further explanations of recent events, which led to the abrupt departure of president Trevor Edwards, long considered the heir apparent to CEO Mark Parker.

“We became aware of some behavioral issues that are inconsistent with Nike’s values of inclusivity, respect and empowerment,” says Parker, who has now committed to stay on beyond 2020 as chairman, president and chief executive officer. “We have a deep leadership bench at Nike … and I’m confident that our restructured leadership team will continue to strengthen our culture.”

The Wall Street Journal reported that Nike forced Jayme Martin, a vice president and general manager of global categories, out after complaints from female employees. While it says no direct charges were made about Edwards, Martin reported directly to him.

Parker also detailed new initiatives set to launch soon, including Nike App at Retail, which will debut at stores in Los Angeles and Portland, Ore. “When you enter the doors, it recognizes you and opens up exclusive product in your app. You can scan for product availability in all nearby Nike doors, or check-out and pay through the app, with no waiting in line.”

Emphasizing the need for data and better ways to use it, Nike is buying Zodiac, a data and analytics company based in New York.

Parker also says Nike retail partners are part of its effort to reignite the brand, citing a program that replaced every shoe Finish Line’s Culver City with the new Nike Epic for three days. “The execution brought together new innovative Nike product, with great storytelling through our Choose Go campaign, and expert service. The results were amazing and served as a proof point.”