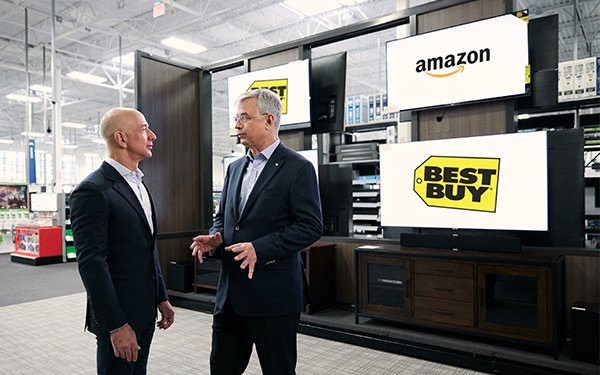 Amazon’s more aggressive move into branding its own Fire TV 4K creates a bigger battlefield for its competition with Roku, the streaming device market leader. Smart TVs with Roku built-in have been available since 2014,  and are consumer favorites, too.

Consumers can buy the sets at at Best Buy or BestBuy.com, but even if they buy it through Amazon’s merchandise website, the sale still attributes to Best Buy. That’s a new arrangement.

"Amazon and Best Buy have a long history of working together, and today we take our partnership to a new level," Bezos said in a statement. Joly said, "Our partnership with Amazon is exciting because we believe Fire TV Edition delivers an incredible user experience and further strengthens the growing connection between home theater, home automation and voice control.”

That voice control function — Alexa on Amazon — might become a crucial selling point. While Amazon’s focus so far has been Alexa’s usefulness on its Echo products, accessing the persona via its own smart TV operating system could allow Alexa to do (and sell) a lot more, while consumers watch. Roku has voice control, but is reportedly working to improve it.

Though Roku has had a head start, Amazon Fire TV is not brand new to the TV set end of the business. It has been baked into 4K sets sold under the Element, Seiki and Westinghouse nameplates since last May.  The Element brand, sold through Amazon.com, is unavailable now, and the product description page reads,  “We don't know when or if this item will be back in stock.”

Roku’s TV sets are sold under various nameplates including Hisense, Sharp, Philips and TCL, which noted in a report last year that the Roku-stuffed sets helped catapult TCL’s North America unit share to 13% from the year before, and made it the third best-selling brand on a unit basis, fifth in revenue.

In all, Roku was the operating system in one in five smart TVs sold in 2017. According to the Wall Street Journal, though, Best Buy will stop marketing its Insignia house brand equipped with Roku. Those sets will be offered only with the Amazon streaming device.

And as a stand-alone device attached to TVs to get streaming services, Roku leads Amazon substantially. According to a report from Parks Associates last year, Roku had a 37% share of the streaming device market, and Amazon had 24%. Google’s Chromecast and AppleTV trail.