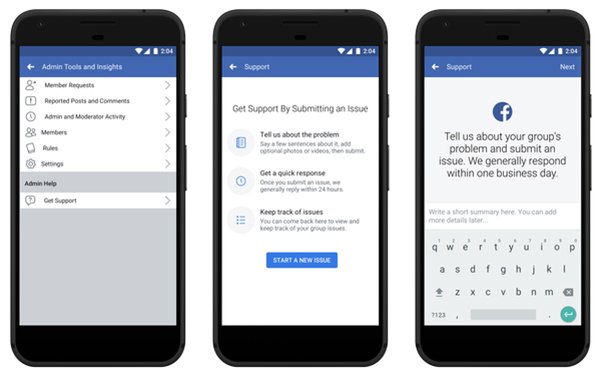 Firmly on the defensive, Facebook is trying to calm critics with new tools to curb bad actors and keep its millions of individual communities safe.

Now, when group administrators or moderators remove a post that violates the rules of their community, they can notify the offending member with details on exactly which group rule they broke.

Group administrators and moderators will also be able to collaborate by adding notes in their administrators activity log after removing a post, as well as select members whose content will automatically be approved every time they post.

In addition, to reduce the time it takes to assist group administrators, Facebook is piloting what it is calling “admin support” -- a dedicated place for admins to report issues or ask questions.

“We aim to respond within one business day,” Alex Deve, groups product director at Facebook, notes in a new blog post.

Expected to roll out over the coming days and weeks, the feature will reside within admin tools.

To help group administrators learn how to keep their communities safer, Facebook has also developed a learning hub, including tutorials, product demos and case studies.

Group admins can spend a lot of time managing their groups, and look for ways to do so more efficiently.

Facebook’s Groups feature has been remarkably successful. Around the world, nearly 1.5 billion users participate in one or more Groups at least once a month.

Yet the new tools come as the social giant continues to face criticism for a range of issues, including its inability to stop the spread of abusive content and misleading information.

Adding to ongoing condemnation from conservative critics, a coalition of left-leaning organizations just launched a campaign to break up the tech titan.

The coalition -- which includes The Open Markets Institute, Demand Progress and MoveOn Civic Action -- is calling on the Federal Trade Commission to force Facebook to spinoff its various units, including Instagram, Messenger and WhatsApp.