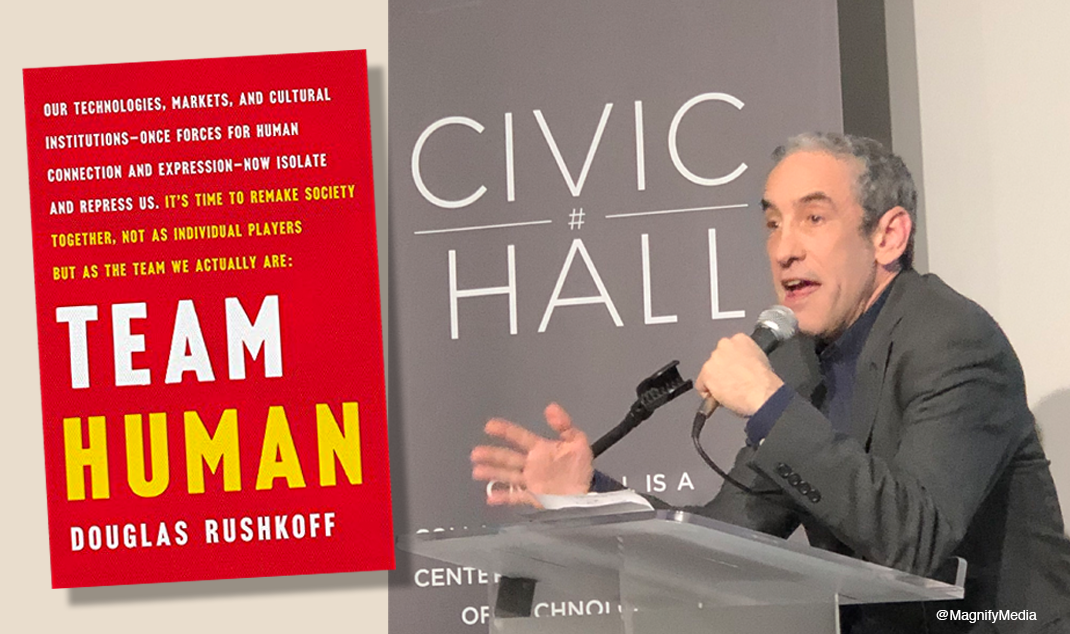 Author  Douglas Rushkoff has a way of catching you off-guard. One moment he’s funny, casual, hip, and then -- in a flash -- he’s rivetingly serious and professorial.

Just to summarize, here’s his take on where we are.

We’re in serious trouble. We’ve let tech run amok. But we can solve this problem if we stop blaming tech, and start embracing the team that matters: Team Human (also the title of his latest book).

When Rushkoff spoke at New York City’s Civic Hall last week, he was preaching the gospel to true believers: a room of humans who are civic tech leaders. And he made his case with his unique brand of casual precision.

"Technology is not driving itself. It doesn’t want anything. Rather, there is a market expressing itself through technology. This operating system is called capitalism, and it drives the anti-human agenda in our society at least as much as any technology,” he said.

While capitalism and tech have put humans on the defensive, it’s up to humans to re-humanize our world, he added.

If you’ve been feeling vaguely uneasy about the way so-called "social media" has made us less social, Rushkoff would agree with you. He said platforms have prioritized growth and profits over humanity, and that has led to digital platforms that "strip the topsoil" of human behavior.

The topsoil of humanity. Just hold onto that idea for a moment.

"Human beings are not the problem; we are the solution. … To many of the developers and investors of Silicon Valley, however, humans are not to be emulated or celebrated, but transcended, or -- at the very least -- re-engineered.”

Rushkoff said one Valley leader's ideas made him want to fight back. Though he refused to name this person, Ruskoff was presumably talking about Ray Kurzweil, who essentially says we are at the end of the era of Homo sapiens. "This is a distinctly antihuman position,” he noted, but one that made him take sides. He is, after consideration, on Team Human. Are you?

"While digital business plans destroy a human-scaled economy, the digital businesses themselves compromise the human sensibilities required to dig ourselves out of this mess. The human beings running those enterprises are no less the psychic victims of their companies’ practices than the rest of us, which is why it’s so hard for them to envision a way out.”

Rushkoff is in turns Talmudic scholar and stand-up comic. But in the pages of “Team Human,” he’s found a mission that is deeply personal. He talks about his book tour, fueled by planes, trains, and automobiles, as painfully hypocritical. He needs to fly to share his book, knowing that air travel is environmentally unsound. It may be his last book, he murmurs -- almost to himself.

He’s a techno-optimist, who’s looked around the corner and discovered a dark side he can’t turn away from.

"Well-meaning developers, who have come to recognize the disastrous impacts of their companies, seek to solve technology’s problems with technological solutions. They see that social media algorithms are exacerbating wealth division and mental confusion, and resolve to tweak them not to do that -- at least not so badly,” said Rushkoff.