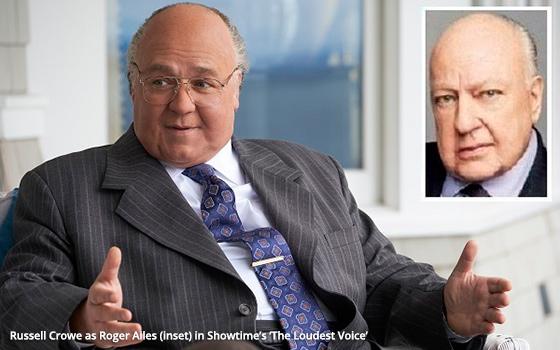 Dead men tell no tales, goes an old saying, but neither are they in any position to complain when a TV miniseries and a movie are made about them after they are dead.

Two such projects are coming soon covering the career of Roger Ailes, who did not live long enough to see them or complain about them. He died in May 2017, less than a year after being ousted from Fox News (in July 2016) in a sex harassment scandal.

The first one is an eight-episode limited series produced for Showtime called “The Loudest Voice” and starring Russell Crowe as Ailes. That's Crowe in makeup and prosthetics as Ailes in the photo above, courtesy of Showtime.

Naomi Watts plays Gretchen Carlson, the 1989 Miss America and later, the Fox News anchor who is credited with blowing the sexual-harassment whistle on Ailes and consequently dethroning him.

The movie version of the Ailes sex-harassment drama is called “The End of the Leg Man.” Details about both projects are presented more or less side  by side in this recent story on The Hollywood Reporter Web site.

The movie is expected to be released by the end of this year, according to the story. In the movie, John Lithgow plays Ailes and Nicole Kidman plays Carlson. Rupert Murdoch gets a going-over in both projects too. Simon McBurney plays him in the miniseries. Malcolm McDowell takes up the role in the movie.

Neither project has been provided yet for critics and TV columnists to peruse, although it is possible the writer of the THR story got a peek. It is not really an exercise in going out on a limb to speculate that neither project will be kind to Fox News in general or Ailes in particular.

Even before the sex-harassment scandal engulfed him, Ailes had long been viewed and portrayed as the devil incarnate in most mainstream media -- both news and entertainment. Certainly, much of their unhappiness with Ailes and the news organization he built stemmed from the fact that he competed successfully with them.

Before he was derailed by scandal, Ailes relished his role as outsider and provocateur. At his best, the man was a showman. At his worst, he was a sex harasser whose comeuppance was long in coming, if not inevitable.

Whether the former image of the man will see the light of day in either this miniseries or movie is anyone's guess. At eight episodes, the miniseries will at least have more “space” in which to tell the Ailes story than the movie, which one assumes will be around two hours long.

For many, Roger Ailes was some sort of puppeteer or ringmaster at the controls of a vast right-wing propaganda conspiracy that not only promoted conservative causes and points of view, but, in the opinion of some, led directly to the election of Donald Trump as president.

The TV Blog believes that Roger Ailes was a brilliant but flawed man. His most creative gesture might have been the slogans he devised for Fox News Channel -- “We report. You decide” and “Fair and balanced.”

Today, most people think Fox News Channel achieves neither of the promises implied in these slogans. But the same can be said for any number of news organizations, both left and right. Is this the world we should credit, or blame, Roger Ailes for? The TV Blog has spent the better part of a lifetime pondering this issue, and still finds no clear answer to that question.