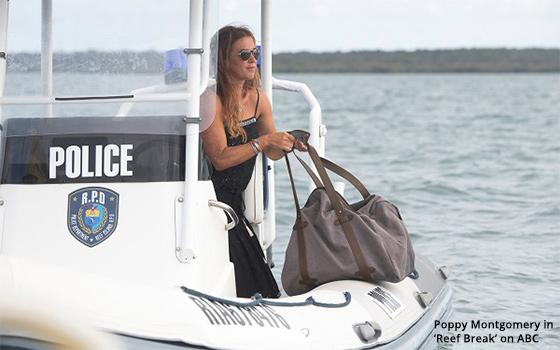 The unfolding of the languorous summer TV season continues with a new cop drama that is a lot like a hundred other cop dramas, except that this one takes place primarily on a beach.

This is the ingredient in the show that one assumes made it more eligible for inclusion on ABC's summer schedule than some other time of year.

Or it could be that this show, titled “Reef Break,” was not quite up to the “quality” of the shows ABC develops for the regular TV season, although the quality of many of those shows is eminently debatable.

Remember B-movies? These were the lesser step-siblings of other, more high-profile movies that always received better distribution and billing than the lower-budget B’s.

It sometimes seems as if a B-level of TV shows also exists, and often they are the series that the old legacy networks introduce for the summer. They frequently have a placeholder feel not unlike the role of the old B-movies, which would occupy space on a movie theater’s program.

Not all B-movies were altogether bad, either. The same can be said for the B-level TV shows. But even so, there is a whiff of not-quite-making-it about them -- which brings us to “Reef Break.”

This series takes place on a fictional resort island (location unspecified, but possibly somewhere in the Pacific) called Reef Island. The show’s principal character is a woman of a certain age named Cat Chambers (“Cat” has suddenly emerged as a hot name seen frequently on TV for female characters and other types of TV personalities).

Cat is played by Poppy Montgomery, formerly of “Cold Case” on CBS. Well, she is not cold anymore. Reef Island is a warm place, where this Cat character once lived and surfed. And now she is back to do them both again, and also to testify at the parole hearing of a convict who once put out a contract on her life.

Yes, she's a saucy one, who is always one step ahead of law enforcement -- right down to the very first sequence in the premiere episode, in which she identifies a perp who is up to no good on her airplane flight into Reef Island, and then notifies the plainclothes air marshal who she also identifies.

Then, while disembarking from the plane, she provides timely help to the air marshal to capture this bad guy without even breaking her self-confident stride. It is a scene completely divorced from reality that could only take place on TV.

She has some kind of criminal past herself in which she acquired skills that endear her to Reef Island law enforcement. In the first episode, she is enlisted to help rescue a rich heiress who has been kidnapped by a deranged ex-Navy Seal.

The plot is convoluted. Among other head-scratchers, a central figure in this kidnapping plot, in which four people died violently, ends up facing no consequences whatsoever, and Cat herself gets a beachfront mansion at no charge, basically as a gift.

It is reasonable to assume that “Reef Break” has been designed as a piece of summer TV escapism. As such, we are not supposed to think too deeply about plot complications lest that consideration stand in the way of the fun we are supposed to be having while watching this show.

“Fun” is not the way the TV Blog would best describe “Reef Break.” A “waste of time,” yes. But fun? Not especially.