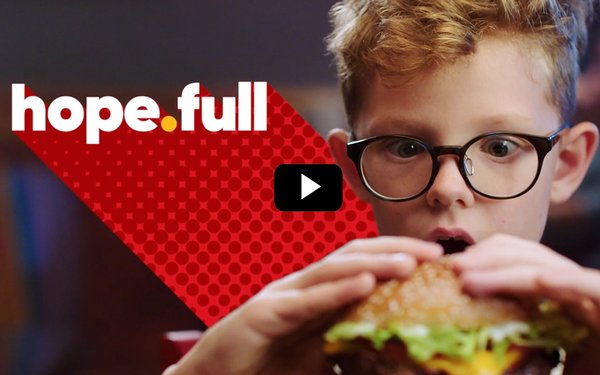 In its first major campaign in three years, “All The Fulls,” Red Robin aims to tap emotional connections with its guests and promote more family dining.

There’s no shortage of “Fulls” in the campaign being supported by ads on television, radio, out-of-home, digital platforms, direct mail, email social media and publicity. They include the company’s variation on the terms “meaning.full,” “joy.full,” “bliss.full” and “table.full.”

Back in 2016, Red Robin’s “Let’s Burger” campaign, which celebrated the “joys of burgering,” contributed to the brand’s first year of positive traffic, which occurred in 2017, according to Executive Vice President-Chief Concept Officer Jonathan Muhtar.

“Over time, we focused more on a value message, and that campaign took a back seat,” Muhtar tells Marketing Daily.

For the new campaign, Red Robin conducted several months of qualitative and quantitative research in partnership with Kelton Research to get a better feel for “the emotional connection with our guests,” he adds. “We really wanted to understand the role we play in their lives.”

The restaurant chain saw an opportunity to try to bring families together.

“One of the key insights that the campaign is rooted in was the lack of quality time for families and the struggle they have to carve out [that] time,” Muhtar says. “We set out to design a campaign that would encourage families to eat together and get the great experience that brings.”

In one TV spot depicting a family with a son and daughter dining together at a Red Robin restaurant, the voiceover extols “more to crave, more to share and more time with those who matter most” as the daughter prompts her father to put down his smartphone.

With locations in 44 states, Red Robin has a fairly broad customer base, but it over-indexes in the families-with-kids cohort “and even a bit more so with females in the 25-34-year age range with young families,” according to Muhtar.

Campaign integration extends to everything from in-store signage to T-shirts for staff and inclusion in Red Robin menus.

“Our intention was to create this campaign that was told to our guests chapter by chapter and tell a really holistic story,” says Wendy Reeves Winter, vice president, account leadership at The Integer Group, which conceptualized the campaign and is working in conjunction with media agency Assembly and Coyne PR.

“Whether it’s seeing a Red Robin gift card when they go to Walmart, or a menu when they get into the restaurant, or a post in their social feed or when they’re watching television, they’re experiencing the campaign at every single touchpoint in which they interact with Red Robin.”