'Mars' Landing On Hulu: A Word About Network TV Reboots 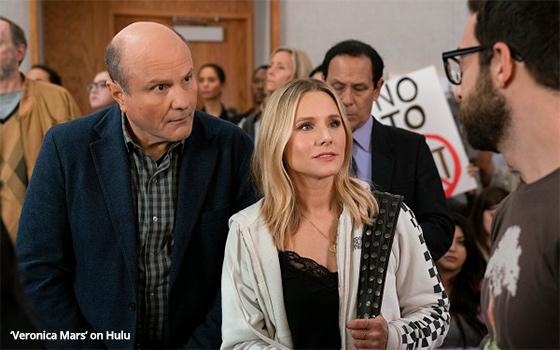 As a long-time devotee of advertiser-supported television, I have come to the realization recently that it smarts every time I hear that a rebooted network series has gone over to the subscription streaming world -- otherwise known as the dark side.

When this happens, I think to myself: Oh no -- there goes another one! While this might seem like small beer to most people, it is the stuff that TV blogs are sometimes made of.

The latest series to lead me into this realm of thinking is “Veronica Mars,” the once-teen mystery series that is returning this Friday (July 26) for a brand-new, eight-episode fourth season on Hulu.

The original ran for three seasons from 2004 to 2007 -- two seasons on the old UPN network and the third on the then-new CW. It is a show that is apparently so fondly remembered that it is being revived 12 years after it was last seen. It helps that the show’s lead actress, Kristen Bell, now 39 (photo above), has emerged in the intervening years as one of prime-time's most bankable stars.

Other examples abound of streaming services reviving well-remembered shows whose initial success and long-term brand notoriety is owed in large measure to the production and promotion support they received in their network television heydays.

One other one in the news this week is “Mad About You,” the now-classic couple sitcom of the 1990s on NBC (1992-99). This old comedy starring Paul Reiser and Helen Hunt is being rebooted, with its original stars, for Spectrum cable.

The revival is expected to make its debut as a free on-demand offering for Spectrum subscribers in December, according to reports this week. In the meantime, producer Sony Television has licensed all 164 episodes of the original series to Spectrum, which will make them available to its subscribers on August 1, far in advance of the revival’s premiere, according to those same reports.

Coincidentally, another story in the trade press this week has USA Network -- not a streamer but an ad-supported basic cable network -- reviving “Nash Bridges,” of all things. Don Johnson, 69, is supposed to star in it again.

As with “Mad About You,” the TV Blog has not detected a groundswell of nostalgia for “Nash Bridges” that would qualify it for a reboot. “Walker, Texas Ranger” maybe. But “Nash Bridges”? That's a bit of a surprise.

At least “Nash Bridges” is being revived for good ol’ ad-supported TV, although one might have envisioned it being remade by its former network, CBS, home of “MacGyver,” “Hawaii Five-O,” “Magnum P.I.” and “S.W.A.T.”

While a number of former network TV reboots have headed to the streaming world (“Fuller House” on Netflix, for example), commercial TV is holding its own. CBS has the aforementioned dramas (and tried and failed with a “Murphy Brown” revival).

ABC will likely do more of those “live” broadcasts of classic TV shows like it did with “All in the Family” and “The Jeffersons” this past spring -- in addition to reviving old game shows left and right.

NBC seems less enthusiastic about its TV past, with the exception of “Will and Grace.” But once upon a time, NBC had the most popular comedies in America -- including “Cheers,” “Seinfeld,” “Friends” and “Frasier.” Remaking “Friends” with a new group of six young stars, or a new “Cheers” with a bar full of new regulars does not strike the TV Blog as rocket science.

Whatever the TV biz decides to pluck from its past to remake in the present, here is hoping these brand-name TV shows stay where they belong -- on free TV with commercials.