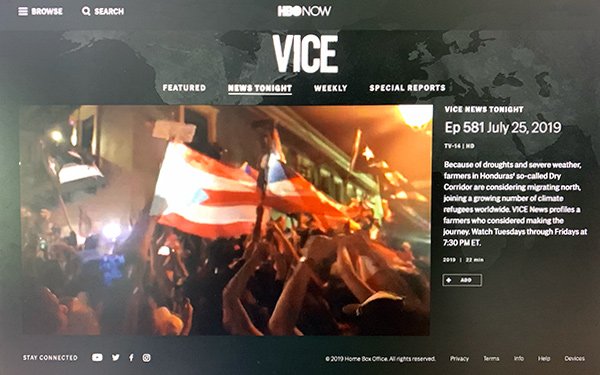 The recently canceled “Vice News Tonight,” Vice’s half-hour newscast hosted by HBO, has racked up the most Emmy nominations among nightly newscasts for the second year in a row.

The show, which called itself “the first modern news show” free of anchors and featuring an ever-changing approach to styles and storytelling, collected 19 nominations across 12 categories.

The news was announced on Thursday by the National Academy of Television Arts & Sciences.

Each of the nomination segments aired in 2018. A special report on Christine Blasey Ford’s testimony against then-Supreme Court nominee Brett Kavanaugh was nominated for Outstanding Coverage of a Breaking News Story in a Newscast.

The show received nominations for Outstanding Feature Story in a Newscast and Outstanding Editing: News for its coverage of Donald Trump’s “zero tolerance” immigration policy.

Other stories covering northern Iraq, the Gaza Strip, Afghanistan and Washington, D.C. also received nominations, as did a hour-long special on the 2008 financial crisis, nominated for Outstanding Business and Economic Documentary.

“Vice News Tonight” debuted on HBO in 2016, but was canceled in June, ending its seven-year collaboration between the cable network and the media company. The show will air its final episode in September, when Josh Tyrangiel, Vice’s executive vice president of news, exits the company.

According to Nielsen data, the show attracted over 500,000 viewers per episode.

Vice News is currently working with Hulu on a news-centric show, The Hollywood Reporter reported at the time of the "VNT" cancellation.

All of the nominated segments can be viewed on the “Vice News Tonight" website.
awards, online publishing
Next story loading