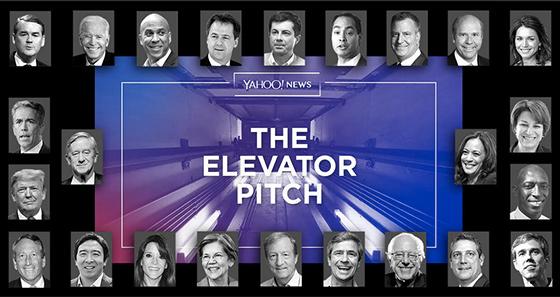 As the 2020 Democratic presidential candidates continue to battle it out, Yahoo News has launched a new video series called “The Elevator Pitch.”

The series feature candidates in a 90-second video taking on the classic elevator pitch format to convince voters why they should vote for them.

In his interview, Sanders stated: “I’m running for president for a couple of basic reasons. No. 1 in my view, Donald Trump is the most dangerous president perhaps in the history of this country, and I believe I am the strongest candidate able to defeat Trump.

"And the second reason is that defeating Trump is not enough. This country faces some monumental crises.”

Currently, all of the episodes are available on the Yahoo News site.

Engaging across digital platforms has become increasingly important for presidential candidates as they try to connect with younger voters.

Earlier this year, NowThis launched a video series called “20 Questions for 2020.” Each segment was a way for young viewers to be introduced to the much larger pool of Democratic candidates at that time.

As of June, NowThisreported its 2020 presidential cycle coverage has counted 150 million views across all platforms.
news, online video, politics, yahoo
Next story loading