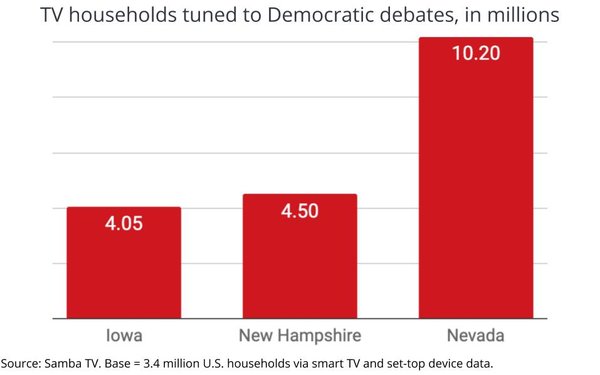 Wednesday night’s debate was televised by NBC and MSNBC and it was the highest-rated 2020 Democratic debate to date.

The Feb. 7 debate aired on ABC.

The Jan. 14 debate was carried by CNN.

Samba TV Director of Data Science & Analytics Jeffrey Silverman attributed the boost to “the Bloomberg effect,” referring to Michael Bloomberg’s first appearance on the debate stage since mounting a massive advertising and social media campaign and surging in the national polls.

“Wednesday night’s debate experienced a massive increase in viewership over the previous debate with more than twice as many households watching the NBC News sponsored contest than the previous NH debate,” he stated, adding, “This was likely the largest debate audience of the election and by far the largest audience in 2020.  Voters in Bloomberg’s home state of New York tuned-in in large numbers to hear from their former mayor with the state’s viewership over-indexing the national average by 28%.”