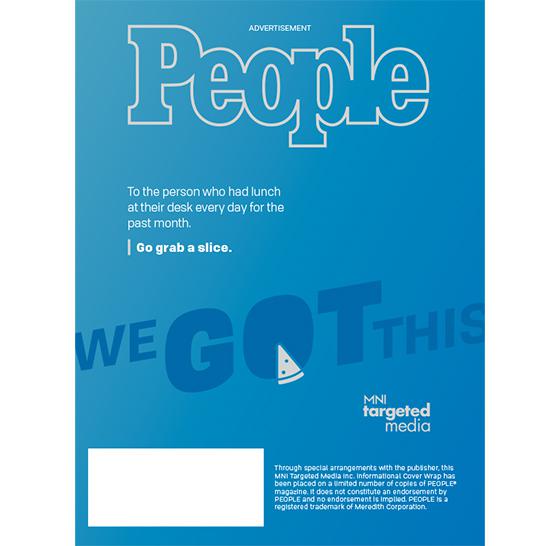 Last month, as the COVID-19 pandemic compelled more people to work from home, Meredith Corp’s MNI Targeted Media realized it had a unique opportunity to reach some of its readers in a new environ.

The division had planned to mail the first of three People cover wraps in mid-March, with copies going to offices. One of those wraps read: “Hungry for more? Call the number below — if you’re one of the first 100 callers, you’ll get a free pizza sent to your office.”

“There are so many ways to make a campaign timeless and in-the-moment. That’s what we were so lucky to do with these cover wraps. We wanted to create an experience,” Janine Pollack, MNI’s director of integrated marketing, told Publishers Daily. “We knew who we were sending these issues to and what the message would be. Then the world as we knew it changed.”

Pollack and her team realized the messaging across the campaign — particularly on the pizza and another breathing-themed wrap — spoke to the growing pandemic moment.

“We realized this is now about personal connection and people who are at home would love to have a pizza delivered,” Pollack said.

Recipients had the option of either ordering a pizza or the ingredients needed to create one themselves. A recipe was included inside People, showing readers how the dish was made in the Meredith test kitchen.

To connect recipients with the meal and to foster a deeper connection with People, sales reps got in touch with those selected to receive an issue — and used it as a moment to check in with them. Reps collected the favorite pizzerias of those who responded.

Rather than limit the giveaway to 100, Pollack and her team decided to give a pizza to anyone who wanted one.

Many recipients felt relief to cook one less meal during this time. Local businesses also experienced a boost as readers contacted them for a free pizza. Pollack and her family ordered ingredients from a local brewery, adding a favorite IPA to the list, and had a virtual pizza-making contest with friends.

The campaign created a moment of calm during abnormal times.

“This was an opportunity to develop a deeper layer of meaning, and it really resonated,” said Pollack.