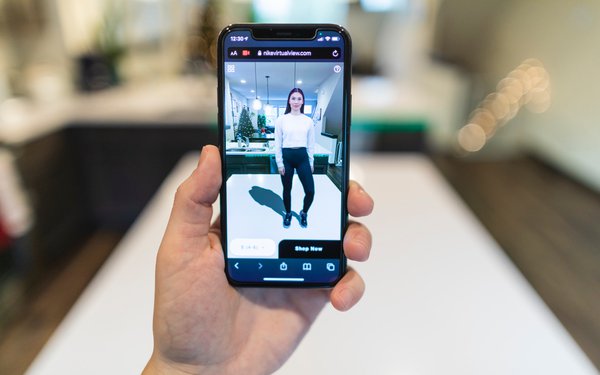 Nike is upping its virtual-reality game, adding 3D holographic content to some of its ecommerce offerings. And while a long list of retailers, including Levi's, Gap, Macy's, Wayfair and Ikea, have been trying to turn tech like virtual reality, augmented reality and 3D into viable selling tools for years, the pandemic may be pushing consumers to new levels of open-mindedness regarding such tools.

Nike is working with Omnivor, a Seattle-based tech company, creating the Nike Virtual View at both Finish Line and JD Sport. The technology lets shoppers pick a hologram that matches their size and body type.

Users see how that apparel will look.

For Nike and its ecommerce partners, the hope is a simple one: That these users will buy more products and return fewer items.

Many people are still reluctant to buy clothes without trying them on, often leaving their online shopping carts abandoned. But with COVID-19 keeping so many people away from stores, that's changing. Virtual shopping, often working with virtual stylists, is gaining ground.

"What is changing is the sophistication and the robustness of the infrastructure required to produce the holographic assets," says Omnivor chief executive officer Adam Kirk. "The technology has matured so that it's now robust enough to get to end-users on the devices they prefer to use."

Many early efforts focused on inconvenient headsets or asked users to download a retailer's app.

"This lets people get a closer look at fit and style right on a browser viewed through their mobile device," Kirk tells Marketing Daily. "Consumers can have that catwalk or runway experience in their own home. They can see a life-sized model of their choosing, to get a sense of how the product is going to look on them."

He says Omnivor is also about to introduce 3D shoe images for Nike.

Apparel brands have been particularly eager to find better ways to use VR and AR. For example, Levi's recent back-to-school shopping campaign included AR try-ons, group video shopping, and a virtual closet on Snapchat, in a partnership with Kohl's.

Furniture brands, including Wayfair, Macy's and Ikea, have also been early innovators.

But Kirk thinks there's more room to grow. "Any 3D purchase that has an interesting shape can use this."

He sees considerable potential in holographic video designed to use after purchase, such as assembly instructions. "Line drawings and assembly manuals are frustrating," he says. "With this type of video, you can effectively look over the shoulder of an expert builder."

Kirk says it also makes sense for many products that aren't all that intuitive to use. "Questions like 'How do I tighten this screw?' or 'How is this supposed to buckle?' can be explained faster and more effectively."

He believes consumers are warming up to the advantages gradually . "We see some pretty great engagement numbers, with about half of users who have the experience once saying they'll come back to it again," he says. "Once people try it and understand that there's a better way to shop, they're interested."