Fox News Named 'Misinformer Of The Year' For 2020 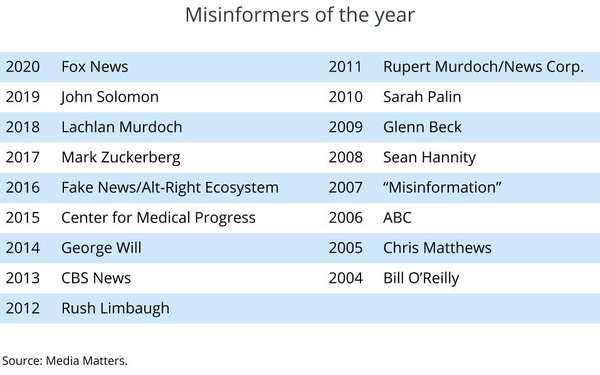 Fox News has been named the "Misinformer of the Year" for 2020 by watchdog Media Matters, marking the 17th consecutive year it has bestowed the recognition.

While this is a first-time recognition for Fox News explicitly, many of the news channel's personalities and leadership have been bestowed previously, including first-time honoree in 2004, former "O'Reilly Factor" host Bill O'Reilly, as well as Sean Hannity (2008), Rupert Murdoch/News Corp. (2011), and Lachlan Murdoch (2018).

While Media Matters' recognitions have generally awarded conservative news leaders and personalities, it has occassionally named "mainstream media" outlets, including ABC and CBS News, as "Misinformers of the Year," too.

As part of its 2020 "Agency of the Year Awards," MediaPost named the "Mainstream Media (a.k.a. 'Fake News)" its "Media Supplier of the Year" for counterbalancing the deluge of misinformation during what was an especially challenging year for their news organizations.

In 2007 ("Misinformation") and 2016 ("The Ecosystem Of Fake News And The "Alt-Right"), the watchdog named general information ecosystems.

But Fox News appears to be the hands-down winner for 2020 -- arguably an epic year for misinformation overall -- because of the role it played in spreading
an epic number of telecasts of false facts, conspiracy theories and the disparagement of official public health, election and other societally accepted standards of truth amid one of the most tumultuous years of news reporting ever. 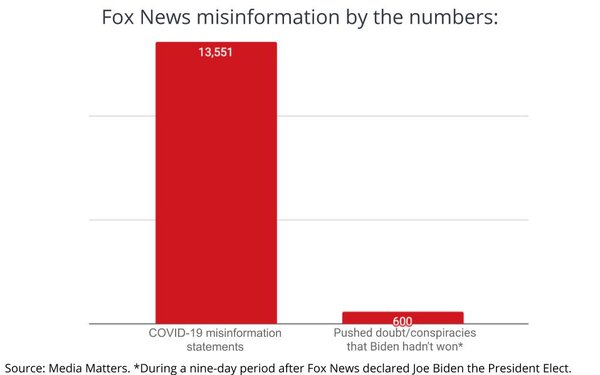 covid-19
4 comments about "Fox News Named 'Misinformer Of The Year' For 2020".
Check to receive email when comments are posted.
Read more comments >
Next story loading