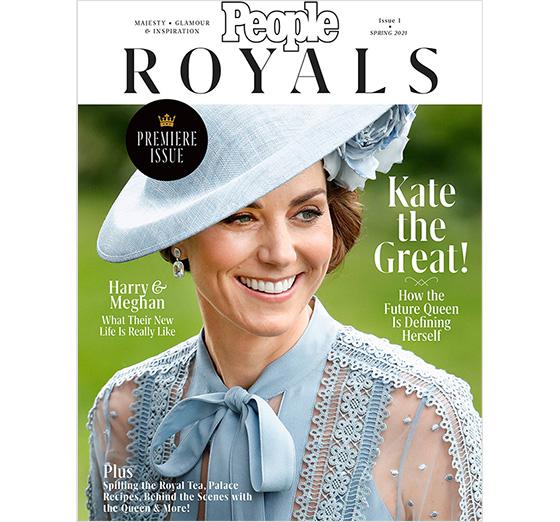 People has upped its people-watching to a niche target.

The publication will add a quarterly — People Royals — March 5. It debuts with 100 pages and is charging $20 for a four-issue subscription.

The tagline sums up its mission: “majesty, glamour, inspiration.”

The launch cover star, Princess Kate, is billed as: “Kate the Great: How the Future Queen Is Defining Herself.” Additional content includes an essay by Sarah Ferguson, the Duchess of York and ex-wife of Prince Andrew, and an interview with Prince Albert of Monaco.

The template is simple: Each issue, a cover story will dive into a different member of the royal family, be it popular English royals or other crown heads. Features put the royals and their lifestyles center stage, such as Ferguson’s “What Tea-Time Means To Me.”

The debut issue also offers “That Time I Met Royalty,” in which actress Rita Wilson recalls meeting Princess Diana, to a closer look at the history of the royal jewels.

Mostly, the latest Meredith publication will highlight glam photos of celebrations and the luxe lifestyles of those in a distinct echelon.

“People has reported on the royals since its debut in 1974 and has established itself as the leading authority on royals," stated Dan Wakeford, Editor in Chief, People. He added the focus of the standalone is to “inspire and entertain with deep stories and lush photography."

English royalty has long captured American attention. Princess Diana has made the most appearances on People’s cover, while the weddings of her sons were among its best-selling issues.

The magazine also claims royal coverage is behind one of its most popular online verticals.

In fact, Meredith reported its digital group in December saw higher viewer metrics. Meredith Digital's online sessions grew 13% to 685 million in December from a year earlier, surpassing the prior record of 680 million in April, according to the company. People experienced 27% growth, while cooking site Allrecipes saw a 20% gain, per Google Analytics.