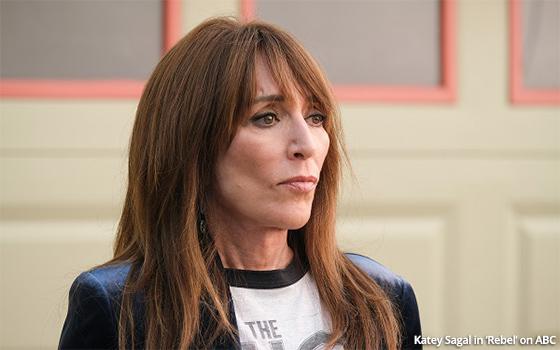 The first problem with this new ABC drama called “Rebel” is its name.

The word is both a label and a nickname for the show’s main character played by Katey Sagal (picture above).

It is one thing to describe someone as a rebel because of his or her rebellious or contrarian nature. But to nickname someone “Rebel” in a TV show and then have everyone in the show call her by this name, as they do here, is ridiculous bordering on comedic.

The character’s real name is Annie Bello. She is a character modeled after Erin Brockovich, who serves as this series’ inspiration (according to the show’s publicity materials) and one of its executive producers.

Like her, Rebel is a non-lawyer who nevertheless gets involved in battles of a legal nature in which powerful organizations such as corporations are victimizing various commonfolk in nefarious ways.

In the series premiere airing this coming Thursday, she stages a noisy public protest against a hospital corporation (hilariously called “Stonemore”) because she suspects that the company is marketing and distributing a surgical product that the company knows is harmful to any patient who receives it, yet persists on marketing it anyway.

The show opens with his messy protest demonstration in which Rebel and her sign-toting supporters invade a garden party being attended by a gaggle of Big Pharma executives and their associates.

This scene is supposed to mirror and celebrate the protest culture that has sprung up in cities across America in the past year, focused mainly on issues of police brutality.

ABC and the makers of this TV show must believe that they will draw an audience by tapping into the protest fever that is gripping at least part of the population at the present time.

The problem is, Sagal, 67, can’t seem to pull it off. When she is seen “crusading” against wrongdoers, her behavior is more like shrieking and haranguing.

She is an hysteric who seems to believe that she can win her battles and persuade others of her rectitude by just yelling louder and longer than anyone else.

You form the impression while watching these scenes that those on the receiving end of her tantrums wind up saying yes to her simply to get rid of her.

tv
1 comment about "'Rebel' Yells Loud And Long In New ABC Drama".
Check to receive email when comments are posted.
Next story loading