Journey To 'Oz' Takes An Eternity On 'American Experience' 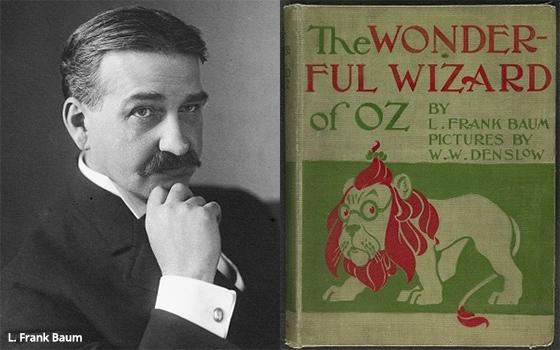 If only an editing wizard had come along to cut this two-hour “American Experience” about L. Frank Baum, the author of the original “Wizard of Oz” book and subsequent “Oz” series, to one hour.

This bit of wizardry would have made this show a much more concise and enjoyable experience than the plodding, rambling and unnecessary two-hour ordeal that it became.

Among other things, this documentary takes an hour and 18 minutes to reach the point in Baum’s life when he hits on the one successful venture of his life, and the one that will define him for the rest of his life down to the present day -- the publication of The Wonderful Wizard of Oz in summer 1900 when he was 44 (original cover pictured above).

His life up until then had been a series of moves around the Midwest along with various jobs and business ventures -- in short, an ordinary life.

To wait until nearly three-quarters of this movie’s running time to get to the main event amounts to burying the lede, as we used to say in the newspaper biz.

This nearly 80-minute preamble to the publication of the first “Oz” book is likely meant to position Baum in the context of his times. And it is also designed to show us how he wove some of his life experiences into his creation of Oz.

But the problem is, up until he became a nationally (and then globally) read author after the publication of the first “Oz,” he had no influence, nor played any discernible role, in any of the important events or movements making their way through American life and society.

For example, when Baum and his wife move to the Midwest to settle in the newly developing town of Aberdeen, South Dakota in the 1870s, the documentary delves into the plight of the region’s Native Americans at that time, but never connects their story to Baum.

We never learn what Baum thought of Native Americans or white America’s attitude toward them. But we sure do learn what a handful of modern-day historians, writers and scholars think of the displacement of the Sioux in the 19th century, even if the Sioux have nothing to do with the story of L. Frank Baum.

These “experts” are given much too much airtime in this documentary to wax windily about all kinds of 19th-century social considerations as seen through the prism of our present-day fixation on issues such as race, identity and immigration.

At one point, Baum -- in his role as an itinerant newspaper publisher -- is praised as a kind of protofeminist for his support of women’s suffrage. Later on, however, he is labeled a racist because of some of the characterizations of ethnic characters in some of his books.

In my mind’s eye, I’m picturing a historic meeting in heaven: “L. Frank Baum … I would like you to meet Dr. Seuss.”

Unfortunately, much of this “American Experience” episode -- subtitled “American Oz” -- plays like historical analysis instead of historical fact.

Delete the adjectives and you get the facts, cautioned the most famous attorney in all of American fiction, Atticus Finch, in a piece of advice to his daughter in To Kill a Mockingbird. It would have been a good piece of advice for the makers of “American Oz” to take up.