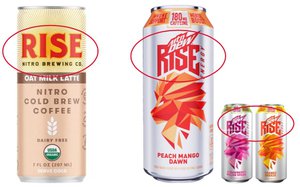 Founded in New York City in 2014, Rise maintains that PepsiCo’s use of the identical product name is harmful because it can cause consumers to be confused about the source of the parties' respective products.

“We are committed to standing up for what's right for our employees, our customers, and their families—even if it means standing up to PepsiCo,” Rise co-founder and CEO said in a news release on Wednesday.

Having used the RISE trademark for canned, caffeinated drinks since 2016, Rise is suing PepsiCo in the U.S. District Court for the Northern District of Illinois, Eastern Division.

Rise’s RISE was launched as a canned, nitro cold brew coffee beverage targeted to morning caffeine drinkers who wanted less sugar and fat than what's found in other drinks.

“After nearly a decade of innovation and brand development, Rise Brewing has become a marketplace success, obtaining numerous awards for its products and becoming the owner of numerous federally registered RISE trademarks that protect its brand,” Rise stated.

“Therefore, through this lawsuit, Rise Brewing chooses to rise and take a stand against PepsiCo’s unlawful actions.”

In this commercial, the first thing James does after getting out of bed at 6 a.m. is reach for a can of Mtn Dew RISE. On the brand’s website, the words “conquer the morning” appear prominently above product images.

Rise also has focused on the sports world to promote its drinks.

Rise said that before filing its suit the company “confronted PepsiCo” about the alleged infringement and PepsiCo “refused to abandon the RISE mark.”

Central to the lawsuit is Mtn Dew’s use of bright-colored, capital letters on its RISE cans and the fact that both companies’ cans feature a light-colored background with the word RISE printed horizontally at the top.

In one example of what Rise claims to be “confusion” about the two RISE names, it claims that shelves at a Northern California Walmart location were stocked with the Mtn Dew RISE on a shelf allocated for its own RISE products.

“Upon information and belief, as it is PepsiCo employees who regularly stock PepsiCo products at large retailers like Walmart, it is most likely that a PepsiCo employee improperly stocked Mtn Dew RISE on the RISE drinks’ shelf space,” the suit alleges.

Seeking a jury trial, Rise is asking the court for a number of remedies. They include compensation for lost profits and a “reasonable royalty” from PepsiCo “for the unauthorized and infringing use of the RISE mark.”

Marketing Daily reached out to multiple PepsiCo reps for comment but had not heard back by deadline.