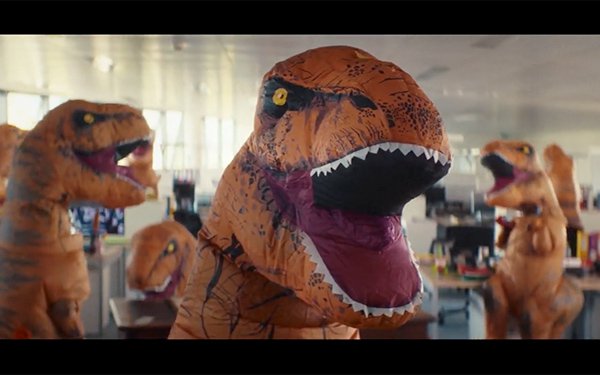 The Paris agency Steve created a humorous campaign for ekWateur, a French independent energy provider, to make a very serious point about encouraging people to switch to renewable energy, which is naturally replenished through sunlight, wind, rain, tides, waves, and geothermal heat.

“It's a relatively new industry and one that's growing fast,” Guillaume Lartigue, co-president and creative director at Steve, wrote in an email to Search & Performance Marketing Daily. “It's important for EkWateur to not only deliver the message, but stand out and prove why they are the right brand.”

The campaign focuses on awareness and branding to generate performance and traffic to EkWateur’s website, prompting new subscribers.

With an entertaining tone, the agency turned to inflatable dinosaurs. The video provides an inside look at what goes on around the office where the energy dinosaurs "work fiercely and tirelessly to help our planet," demonstrating that they might not be the most reliable when it comes to performance.

Although 70% of the French are in favor of subscribing to a green electricity offer, only 10.9% voluntarily consume this type of sustainable model.

The campaign, The Dino Worldwide Company, showcases the daily life of many inflatable T-Rex dinosaurs busy making increasingly more money, rather than changing their ways to help the planet.

The spot was created by Excuse My French and the Canadian director François Jaros, who has experience in cinema and advertising.

Energy continues to take the spotlight in the news worldwide. On Tuesday, in an interview with the BBC, Prince Charles spoke about his 50-year-old Aston Martin and efforts to reduce his carbon footprint. He had his favorite vehicle converted to run on an alternative energy source. changing the fuel for his car to a more sustainable source, cheese and wine. It turns out the Prince uses a fuel called E85, consisting of 85% bioethanol and 15% unleaded petrol.

EkWateur’s video, which focuses on alternative fuel sources, debuted at the end of August across YouTube preroll, out-of-home in major French cities, and social media. It also ties into search engine marketing and advertising.

When asked how Steve will determine success, Lartigue said: “If the campaign leads to changes in the way French people think about and consume energy, it will be a success.”

The independent agency, Steve, founded in 2015, is led by Lartigue, Grégoire Soufflet, and Nicolas Lévy. It specializes in brand strategies, advertising and social media.