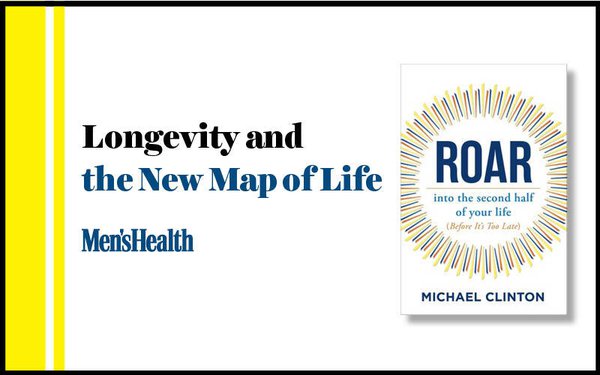 Topline takeaway: By maintaining health metrics and having access to good health care, the chances of living to 100 have never been greater.

The discussion was called “Longevity and The New Map of Life,” and featured a panel of Men’s Health editor-in-chief Richard Dorment, and Laura L. Carstensen, the founding director of the Stanford Center on Longevity.

Clinton, former president of marketing and publishing director of Hearst Magazines and the author of "Roar: into the second half of your life (before it's too late)," moderated the conversation. The discussion explored how cultural and societal policies and practices breed inequity when it comes to aging, as well as the extraordinary potential of an age-diverse workforce, and the importance of learning for life.

The importance of living with purpose was also a theme. Carstensen, again: “Purpose predicts life expectancy," she said. “People who have a strong feeling of purpose live about six years longer than people who don’t. We need purpose from early to late in life. People tend to have less of a sense of purpose after they retire. Retired men, especially.”

Clinton said the evidence indicates that if you’re 50 and healthy, you have a great chance to live to be 90 or even 100. “The script that we have been given for the second half of life is being rewritten by people who are launching new careers, lifestyles and relationships,” he said. “Retiring is being replaced with rewiring to build out a new second half of life.”

Dorment noted that how to live better for longer has been a cornerstone of the Men's Health brand mission for more than three decades—the notion of optimizing body and mind at every age. “We couldn't pass up the opportunity to join forces with Michael Clinton’s ROAR initiative to host Laura Carstensen and provide a platform to share her insights at this most-valuable event,” he said.
Next story loading