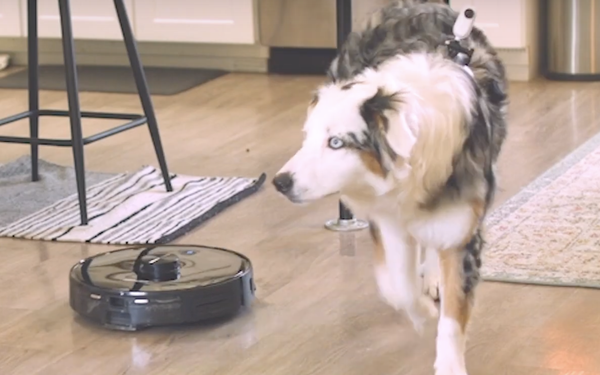 “We discovered that despite the different industries and brand positioning, part of our target audience is the same: pet lovers,” Sherry Liu, Airrobo’s marketing director, told Marketing Daily. The companies pointed out that 70% of U.S. households own a pet.

“A co-branding campaign aiming at both brands' social followers and subscribers is helping pet lovers solve real-life problems and increase our website traffic without breaking the bank,”  Liu said.

On the latter point, she noted this year’s “rise of digital advertising costs and fierce price competition on Amazon,” a key sales site for both brands.

The 35-second video, with the tagline "See the world clearer. Live the world cleaner,” follows a puppy who, after its owner leaves for the day, proceeds to make a total mess of things. No need to worry, though. A robot vacuum cleaner comes to life and cleans up everything. For the first ten seconds of the ad, an online graphic at the bottom of the screen reads “Filmed with Insta360.”

Specifically, the ad shows the Airribo T10+ robot vacuum cleaner, which is said to include a bag large enough to store pet hairs for up to 45 days, and was filmed using the Insta360 GO 2, described as “the world’s smallest action camera.”

The camera company offers an optional “Pet Strap Mount” that will “capture the world from your pet's perspective.” It’s shown in the video, but doesn’t seem to have been used in the filming.

In conjunction with the video, the two partners are offering both of the products in the video at special discounts through August 10 via a co-branded landing page. The robot, normally priced at $499.99, is being discounted 30%, and the camera, normally $299.99, has a 10% discount.

Liu said that Airrobo and Insta360 are promoting their team-up through social media interaction, including retweeting, sharing posts and tagging each other. The partnership is also being featured in each brand’s email newsletters, which Liu said reach more than 100,000 subscribers.

Outside of this tie-in, Airrobo focuses its marketing on PR and ecommerce marketing, while Insta360 relies more on influencer marketing and content creation, Liu said. Both companies also use SEO, electronic direct mail, social media, digital advertising and seasonal promotions.

Airrobo’s products, which include air purifiers and humidifiers in addition to robot vacuums, are sold through ecommerce: Amazon, Walmart, and Shopify.

Insta360 is sold both through ecommerce, including Amazon and Lazada, and at retail locations.