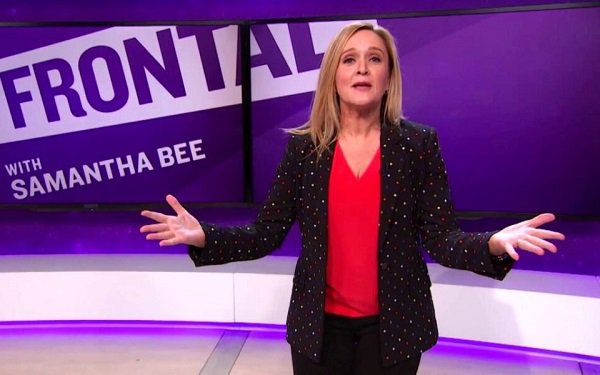 The cancellation this week of “Full Frontal With Samantha Bee” brings a mini-era to an end.

Stretching from 2010 to just the other day, Samantha Bee’s show along with Conan O’Brien’s represented a bygone effort by TBS to expand into a programming category you might describe as “live-action comedy/talk.”

“Full Frontal” was not a talk show, per se, because it had no segments in which guests came on to chat with Bee in the manner of other comedic talk shows.

“Conan” had a monologue, a comedy segment or two, sit-down guests and then either a stand-up comedian or a band or singer to close the show.

“Full Frontal” was a weekly half-hour. It premiered on TBS in February 2016, first on Monday nights, then Tuesday nights, both at 10:30 Eastern, leading into “Conan” once a week.

The whole show was centered on Bee, who previously honed her satiric comedy style as a correspondent on Jon Stewart’s “Daily Show.”

“Full Frontal” had her ranting in the studio on current events and personalities in the news, combined with outside comedy segments.

Her arrival on the nighttime satire scene was heralded by some because she represented the only female voice in a category long dominated by men.

With her cancellation, TBS’s move into this kind of content, which started so long ago, is now at an end.

In the coverage of the “Full Frontal” cancellation, all of the stories pointed the finger at the newly merged media behemoth Warner Bros. Discovery, now being run primarily by the top brass who ran Discovery Networks.

From the get-go, they made no secret of their plans to delve into every nook and cranny of the company to find areas where cuts could be made.

In the case of “Full Frontal,” the problem was likely the usual thing: A shrinking audience made it unprofitable. And so, the show had to go.

Similar viewership data for “Full Frontal” was not reported in the trade press stories on the show’s cancellation this week.

The cancellation is reportedly part of a wider trend at TBS. Bruce Weitz, general manager of TNT, TBS and TruTV, recently left the company.

Other TBS cancellations recently include the sitcoms “Chad” and “The Last OG.” As for TNT, the stories say the network is exiting the original-drama business after “Animal Kingdom” and “Snowpiercer” end their runs.

But political talk and satire are still alive and well in the WB Discovery family, despite Samantha Bee’s cancellation.

“Real Time With Bill Maher,” which has been around since 2003 and “Last Week Tonight With John Oliver,” which started in 2014, are still on HBO and HBO Max.

And by all appearances, the ad-supported “The Daily Show” on Comedy Network seems safe, at least until the accountants get to it.