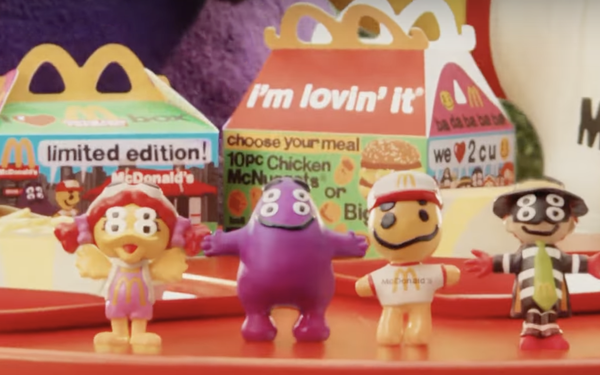 The ad, via Wieden+Kennedy, New York, begins with Cactus Plant’s mascot Cactus Buddy, driving around and stopping for Grimace, who now has an extra set of eyes. Soon, Grimace, Birdie and Hamburglar hop into the car and head to McDonald’s, where they order the box.

In the ad, none of the characters speak English. Instead, they speak a gibberish language except when they say “the box, the box!” to order.

In the end, the four are seated outside a McDonald’s, though a pan shot reveals that they’re actually all in the Cactus Plant Flea Market Box.

Cactus Plant is a streetwear brand that came to prominence after Kanye West was photographed in 2016 wearing a T-shirt that bore the caption “CPFM ADULT FILMS.” Pharell was also an early fan of the brand and was featured on Cactus Plant’s site in 2015. Since then, the brand, run by Cynthia Lu, has designed merchandise for West and Kid Cudi.