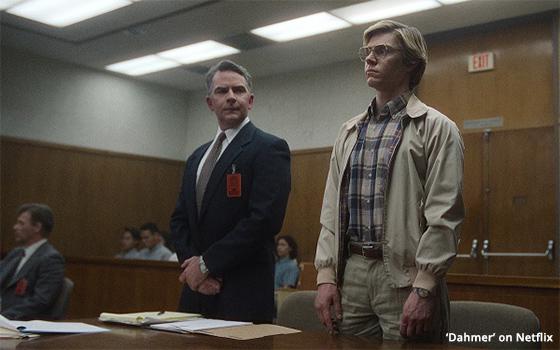 He was the notorious serial killer who murdered 17 men and boys between 1978 and 1991. The irrefutable evidence of his crimes included an array of body parts -- heads, bones etc. -- that were found stored all over his Milwaukee home. His story is grotesque and so was he.

Moreover, his story has been retold again and again on TV. One wonders why it needs to be told again.

The 10-episode series from producer Ryan Murphy -- awkwardly titled “Dahmer: Monster: The Jeffrey Dahmer Story” -- was the most-watched show on Netflix during the week starting on Monday, October 3 -- with 205.33 million hours viewed, according to Netflix.

“Dahmer” is now the second-most popular English-language series in Netflix history with 701.37 million viewing hours since it started on September 21, according to Netflix’s own calculation. Number 1 is “Stranger Things, Season 4” with 1.35 billion hours, Netflix says.

A press release from Netflix reporting on the numbers also noted that a companion show to the “Dahmer” miniseries -- “The Jeffrey Dahmer Tapes” -- also made the Netflix’s list of Top 10 shows for the same week with 31.4 million hours.

In “The Jeffrey Dahmer Tapes,” Dahmer is heard on audiotape talking about his crimes. The show is one of three installments in a series of such shows called “Conversations With a Killer,” also available on Netflix.

The other two were “The Ted Bundy Tapes” and “The John Wayne Gacy Tapes,” the latter also making the Netflix Top 10 the week of October 3 as the “Dahmer” miniseries ignites serial-killer mania throughout the land.

All of those hours of sitting in front of the tube absorbing the stories of serial killers in gruesome detail … it never ceases to amaze me what people will watch for their entertainment.

Bundy (who is sometimes confused with Al Bundy, the hapless, fictional dad in “Married … With Children”) committed at least 30 murders from 1974 to 1978 and possibly more.

Gacy murdered at least 33 young men and boys from 1972 to 1978 in his small home in a Chicago suburb and buried most of them on the modest property.

Others who became nationally famous included Richard Speck, Wayne Williams, Joel Rifkin, Aileen Wuornos and so many more. The internet has plenty of lists of them.

Michael C. Hall was nominated for a Best Actor Emmy for five consecutive years (2008-12) for the title role in “Dexter,” but never won. Pity.

The era of serial killers that spawned so many famous murderers has had an enormous influence on popular culture -- particularly television, which is, after all, the subject of these TV blogs.

As everybody knows who has ever watched a police procedural since at least 2000, our cop shows are awash in fictional serial killers whose methods seem to become more elaborate and creative with each passing year.

The hours and hours of content (what used to be known as “programming”) devoted to the stories of real-life serial killers is probably not calculable (at least by me).

On the subject of Jeffrey Dahmer alone, Wikipedia lists at least four feature films, and at least a dozen documentary TV shows.

Many (if not all) of the TV shows contain ample videotape footage of Dahmer being interviewed in prison. These interviews have been seen again and again on TV.

The most famous of these might be Stone Phillips’ interview with Dahmer and his father, Lionel Dahmer, in the prison where Jeffrey Dahmer was incarcerated. That interview resulted in a 90-minute special episode of “Dateline NBC” in 1994.

The point is that, clearly, the story of Jeffrey Dahmer is a well-told tale. It can be argued that it need not be told again.

Here is a bit of the publicity synopsis posted on the Netflix press site for “Dahmer”: “Between 1978 and 1991, Jeffrey Dahmer gruesomely took the lives of seventeen innocent victims. ‘Dahmer - Monster: The Jeffrey Dahmer Story’ is a series that exposes these unconscionable crimes.”

“Exposing” these “unconscionable” crimes? They are already very well-exposed. Why continue doing so?