The Whole Story: Magazine Readers Across the Media 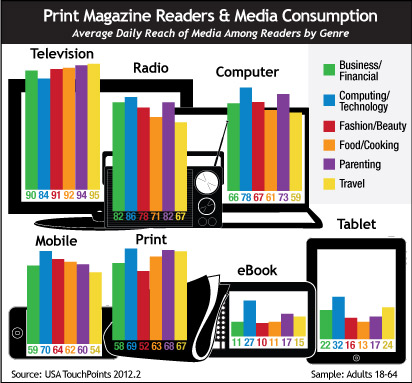 Whether using magazines as the central vehicle for a campaign or as a means of extending a campaign based around other media, it’s helpful to understand how readers of various print magazines compare in terms of their overall media profile.

This USA TouchPoints analysis looks at six different genres of magazines to determine where the differences in average daily reach of specific media stacks up among readers of such publications.

Although many of the findings show little variance between genres, clearly not all readers are the same with respect to their broader media consumption.

Take Computing/Technology magazines for example — in terms of daily average reach, readers of this category lead the way (sometimes only just) across every medium in the analysis with the single exception of TV — where they fall in last place.

Reader of Parenting magazines deliver well against TV, Computer, Print and eBook – where they take second place in terms of average daily reach – and Radio where they are in equal second place.

Beyond the individual reach numbers for different types of magazines, and with a few notable exceptions, there are significant differences between the category that delivers highest and lowest daily reach by medium. Sometimes, that difference is more than 20%.

Obviously, specific titles within categories will vary, but as an indicator of how readers of different types of magazines also consume other media, this analysis provides an interesting comparative overview.