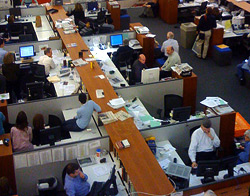 Being a newspaper reporter is the worst job in the United States in 2013.

That's according to the latest “Jobs Rated Report” by CareerCast.com, which surveys and ranks professions by their desirability, including factors like prospects for future advancement.

Newspaper reporter ranked last out of 200 jobs in the 2013 CareerCast survey, down four spots from 2012. It was judged to be worse than lumberjack, in 199th place, military enlisted personnel, at 198th, and actor, at 197th. Mail carrier also ranked in the bottom 10, at 193rd.

At the top end of the spectrum, the top-ranking job was actuary, in first place, followed by biomedical engineer and software engineer, in second and third place, respectively.

In addition to not being very desirable, there are a lot fewer newspaper reporting jobs to go around.

The Newspaper Association of America recently reported that total advertising revenues fell from $49.3 billion in 2006 to $25.3 billion in 2012, for a roughly 50% decline in six years.