Facebook Pays Dearly To Stay Hip - $19B For WhatsApp 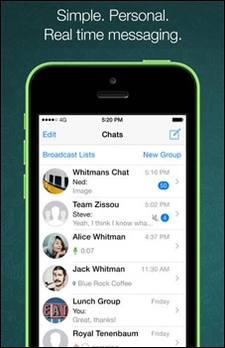 Yikes. Even Facebook’s war chest must feel lighter this evening with the $19 billion the social network just committed to acquiring hot mobile messaging app WhatsApp. As Forbes reporter Brian Solomon points out, the “insanely high” price means that Facebook believes the company is worth about $42 per user. It also puts a value on the company that exceeds the market cap of Campbell Soup, American Airlines, Ralph Lauren and Tyson Foods, per Forbes. WhatsApp has just 55 employees.

What is Mark Zuckerberg getting for his $12 billion in Facebook shares, $4 billion in cash and another $3 billion in restricted stock to vest in four years? Well, he shores up what is becoming a leak in Facebook’s boat -- mobile messaging. But most of all he gets some street cred with the kids. Even though the company does have one of the most popular messaging apps in the various app stores, WhatsApp, along with SnapChat, has captured the loyalty of younger users who prefer the hipper environment to their parents’ social network and even to SMS. There has been a substantial shift in messaging habit in the last year because of mobile messaging apps. At the same time, Facebook has seen teen use drop.

While there undoubtedly is considerable overlap, WhatsApp claims over 450 million monthly users worldwide and engagement levels that make even social networks envious. Seventy percent of WhatsApp monthly users are active each day.

Zuckerberg said in the statement that he believed WhatsApp was on track to exceed 1 billion users. “The services that reach that milestone are all incredibly valuable,” he said in a company statement. He also added, strangely to my mind, “WhatsApp had every option in the world,” and he was glad they chose Facebook. Really? How many other companies have $19 billion to throw around on a 55-person startup, no matter how hip it may be?

Pivotal Research's Brian Wieser says "the acquisition is difficult to justify on metrics we use to value Facebook." To justify the price, WhatsApp would need to generate about $1 billion in revenue by 2018, he argues. Regardless, he acknowledges that whatever the monetization picture, the acquisition makes sense strategically in extending Facebook's portfolio of social networks as a hedge against any disaffection for the core property.

As it did with its Instagram purchase, Facebook is fighting user ennui with the social network by buying the next big thing. And like his Instagram purchase, he also intends to keep the WhatsApp brand distinct from Facebook, perhaps preserving some of its hipness longer. Collective Factory founder and former mobile lead at Isobar Gene Keenan says, “Zuck is smart. He has read the history about social networks: They die if they don't stay fresh and relevant. Answer? Follow the kids, purchase competitors.”

Angela Steele, CEO of IPG's Ansible, adds: "It's a hefty price that indicates the incredible importance of a mobile user base for Facebook -- especially a global mobile user base, though the full strategy behind the acquisition and long-term plans remain to be seen."

But if WhatsApp remains relatively independent and under the control of its founders, it raises the question of how it will monetize at scale, especially within a company that is driven by ad revenue. CEO Jan Koum has famously eschewed traditional advertising and even the digital data that drives much of it. In a post last year he wrote: “No one wakes up excited to see more advertising.” He went on: “Advertising isn’t just the disruption of aesthetics, the [sic] to your intelligence and the interruption of your train of thought.... Remember, when advertising is involved you the user are the product.” He also proudly rejects tracking users and collecting their data. “Your data isn’t even in the picture. We are simply not interested in any of it.”

There is also a clash of cultures and models here that needs to be ironed out.

Dan Israel, Digital Strategy Lead, Sapient, says: "This kind of reminds me of the days when the oil and car companies would buy off (or kill off) any potential challengers. Without question, this is a defensive move, not a strategic one. Zuck is all about ads; WhatsApp is not. FB is not as focused on messaging as WhatsApp, whereas WhatsApp defines messaging now, and is practically killing off SMS on its own. I also think the definitions of privacy differ for the two companies, to some degree.  Suffice it to say, it will be interesting to see whether the WhatsApp CEO from the Ukraine rebels or acquiesces to FB in the long run.

WhatsApp does charge users, but whether that revenue can be sustained or be enough to satisfy Facebook and its stockholders is an open question.

How the $42 per-user valuation reconciles with a fee-based model is anyone’s guess.

Despite the high price -- nay, astronomical prices -- arguably, Zuckerberg had no choice but to purchase one of the emerging messaging apps. Worldwide, these apps have scaled monstrously in just the last year. Facebook claims WhatsApp is gaining 1 million users a day. And the volume of messaging going on in these apps is already approaching that of SMS. They had already tipped their hand in bidding for SnapChat, which has just a fraction of WhatsApp’s reach. And WhatsApp has reach into international and emerging markets Facebook will need. Facebook doesn’t have the overseas scale in its messaging app that WhatsApp does.