Record Ratings And Other Oscar Surprises 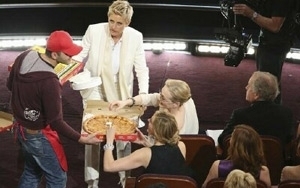 The Oscars were fairly predictable this year, at least as far as the winners were concerned. I don’t think there was a startling announcement throughout the show, at least not in the primary categories.

But there were all kinds of other surprises throughout this year’s event, from host Ellen DeGeneres orchestrating the first truly interactive moment between Oscar viewers and participants in the history of the Academy Awards to John Travolta unexpectedly becoming the most talked about celebrity of the night. I’m referring, of course, to DeGeneres’ star-studded selfie, the most re-tweeted tweet ever -- and Travolta’s still unexplained mangling of one of the best-known names on Broadway, Idina Menzel.

The aftermath of these two “moments” has been even more interesting than the moments themselves. As of this writing, the Most Famous Selfie of All Time has passed three million tweets. DeGeneres announced yesterday on her show that Samsung had agreed to donate $3 million to charity; she elected to split the money between St. Jude’s Children’s Hospital and The Humane Society. What a great outcome for everyone involved, from the many stars in the picture to each and every person who tweeted it. (DeGeneres used a Samsung Galaxy 3 to get the picture, which Bradley Cooper actually took.)

Meanwhile, Slate has created a widget called The Adele Dazeem Name Generator on which readers can “Travoltify” their names. I think it safe to say that more people are talking not only about John Travolta and Idina Menzel but also Slate than have done so in a very long time.

Also, the Los Angeles pizza chain Big Mama’s and Papa’s Pizzeria has benefited handsomely from its surprise inclusion in the Oscars, when DeGeneres decided that pizza should be delivered to the starving A-listers in the front rows. Edgar Martirosyan, now the most famous pizza delivery guy on the planet, also co-owns Big Mama’s and Papa’s with his brother.

Selfies, name-mangling and pizza aside, perhaps the biggest surprise generated by this year’s Academy Awards is the size of the audience that watched at home. According to ABC, with an average audience of 43.7 million viewers the Oscarcast was the most watched entertainment telecast on all of television since the finale of NBC’s “Friends” in May 2004 and it was the most-watched Oscar telecast since 2000. It reached a four-year high among adults 18-49; seven-year highs among adults 18-34 and men 18-34; a nine-year high among teens 12-17, and an eight-year high among kids 2-11.

The Academy Awards seemed to have lost a bit of their luster in recent years, at least as one of the biggest and most important telecasts of the broadcast season. The show itself seemed to be increasingly irrelevant -- and of greater concern, increasingly boring and of ever decreasing interest to younger viewers. Pundits have repeatedly declared that because blockbuster movies are rarely nominated in the primary categories that moviegoers -- most of them teens and young adults -- aren’t interested in the Oscars or other awards shows. Ratings spikes for the Oscarcast in 1998 (when “Titanic” was at the center of the Oscar excitement) and 2004 (when the third and final installment of the “Lord of the Rings” trilogy was honored as Best Picture) seemed to reinforce this assertion.

So what’s behind this year’s surge, especially among young viewers? It can’t be the movies that were at the center of it all. Other than “Gravity” and “Frozen,” I don’t think any of them can be mistaken for box-office gold. They sure didn’t last in the multiplexes where I live.

Was it the appeal of the broadly appealing Ellen DeGeneres as host? Possibly. DeGeneres certainly has a powerful daily platform on which to promote whatever she is taking part in.

Or could it be the more superficial aspects of Oscar fever? That is, the opportunity to gawk at celebrities on live television and take to social media to either fawn over them and make declarations of love for who they are and what they do, or to gush over what they are wearing, or to say terrible things about how they look? I don’t think it was the latter -- at least not this year -- because in terms of Oscar fashion there wasn’t a train wreck to be seen.

More likely it was the simple fact that people around the country were ready for a night of pure escapism, not simply because we are burdened by mounting problems at home and abroad, but because most of us are suffering a prolonged winter season of unrelenting misery. Fortunately, it stopped raining in Hollywood as the celebrities began arriving for the big event. Sometimes television really does provide the best means of escape. When it’s on its game, nobody does that better than broadcast.

It may also be that social media is actually reinforcing the appeal of mass-audience television events, restoring to them the outsize appeal and happy urgency they used to generate before the days of personal recording devices and niche-TV. There’s nothing quite like a shared entertainment experience, even in the comfort of one’s own home.