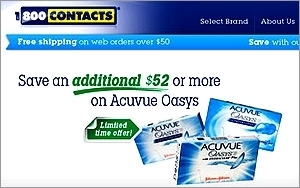 U.S. District Court Judge David Sam in Utah rejected Lens.com's arguments that 1800Contacts engaged in “sham litigation” by bringing trademark infringement lawsuits against competitors that purchased pay-per-click ads. Sam ruled this week that 1800Contacts lawsuit was not a “sham,” given that the company had a “legal and factual basis” for bringing the case.

In the last decade, 1800Contacts has sued at least 15 companies -- including Lens.com, Walgreen and Lensfast -- of infringing trademark by purchasing the term “1800Contacts” as a trigger for pay-per-click ads on search engines. Lens.com argued in a 2011 lawsuit that 1800Contacts' litigation campaign violated antitrust laws. "Notwithstanding its carefully crafted image, 1-800 has battled to censor and impede the universe of information that can be passed on to consumers; and conspired to ensure that consumers never taste the fruits of competition,” Lens.com alleged in its lawsuit.

Lens.com brought the antitrust lawsuit after U.S. District Court Judge Clark Waddoups in Utah sided with the company and dismissed the trademark infringement case filed by 1800Contacts. Waddoups said in his opinion that if 1-800-Contacts was able to prevent competitors from appearing in search results when consumers searched for its name, the result would be "an anti-competitive, monopolistic protection, to which it is not entitled."

While Lens.com's antitrust case was pending, 1800Contacts appealed the dismissal of its trademark case. Last summer, the 10th Circuit Court of Appeals agreed with Lens.com that it didn't infringe 1800Contacts' trademark by using it to trigger paid search ads. But the court also said that 1800Contacts was entitled to proceed with one small portion of its case -- a claim that one of Lens.com's affiliates wrongly used the term 1800Contacts within the text of the ads.

That ruling, marking a partial (though minor) victory for 1800Contacts, was enough to show that its lawsuit wasn't a “sham,” Sam ruled.

Santa Clara University law professor Eric Goldman, a trademark and advertising expert, says the ruling is not a surprise. “Antitrust law is not well-designed to redress abusive and anti-competitive trademark lawsuits,” he says in an email to Online Media Daily. Goldman has criticized 1800Contacts for its AdWords-related litigation campaign, which he says “appeared to be solely about suppressing its competition.”